BIAFRA: At Last, Kanu Backs Down, Begs Buhari For Dialogue From Asylum 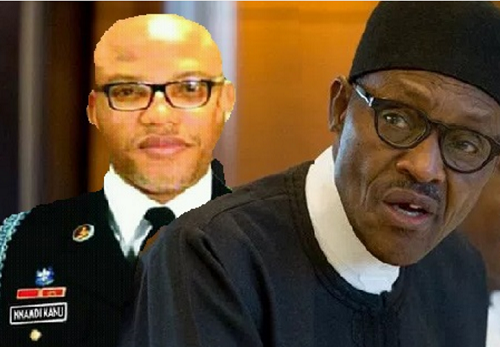 At last, the leader of the Indigenous People of Biafra (IPOB), Nnamdi Kanu, has abandoned his violent struggle for the realization of Biafra and called for a dialogue with the Federal Government to end the agitation.
The IPOB leader through his lawyers, Ifeanyi Ejiofor and Amoebi Nzelu, called for negotiation with the Federal Government to end the agitation for self-governance.
Kanu was said to have taken asylum in London following the proscription of IPOB as a terrorist organization. A former Abia governor Orji Uzor Kalu made the revelation over the weekend.
Recall Kanu was arrested and later granted bail for allegations of treasonable felony, maintaining unlawful society, illegal possession of items and many others.
The allegations against Nnamdi Kanu also include a plot by the IPOB leader and some persons now at large to cause crises that might force President Mohammed Buhari, to concede certain parts of Nigeria to a purported Biafra Nation.
Kanu’s lawyers while reacting to the Federal Government’s decision to release some members of the group it arrested in February, said they were not opposed to talks with the government.

Mr Ejiofor said, “Nnamdi Kanu is not averse to a political solution in resolving his present politically orchestrated ordeal.

“He welcomes genuine political solution to this case. Nnamdi Kanu has people of proven integrity and impeccable character that will negotiate on his behalf, based on his demands when communication on this effect is established.”
However, on the claims that the Movement for the Emancipation of the Niger Delta, MEND, was negotiating on behalf of Kanu and IPOB, the lawyer said, “In the past few day, the media was awash with news on negotiation going on between the Federal government and members of MEND, where our client’s name (Nnamdi Kanu) conspicuously featured.
“It is on that note that we wish to inform the general public that Nnamdi Kanu has no connection, contact, ties or any kind of relationship with members of the MEND.
“As such MEND has no implied, direct or express authority of Nnamdi Kanu to represent him or IPOB in any purported negotiation going on between MEND and the Government.
“The general public is accordingly advised to ignore, discountenance and disregard the falsehood been peddled by MEND.”
Culled from PM News
Follow Us on Twitter!