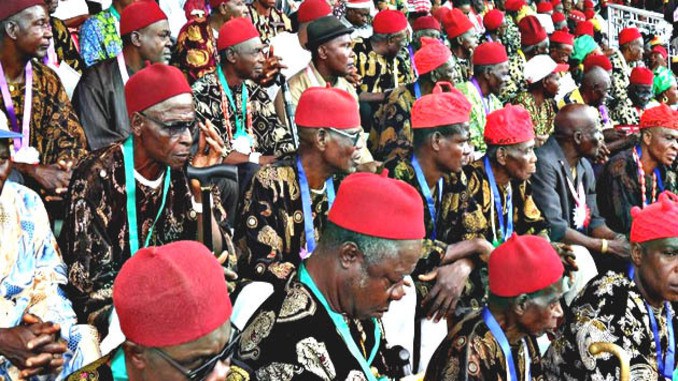 The agitation for the restructuring of the country gathered more steam at the weekend as Eminent Leaders of Thoughts, a group of Southern leaders clamouring for the rebalancing of the Nigerian federation, said it would meet next week to review emerging position of the North on the issue.
The meeting is expected to initiate a Southern synergy that would interface with those of Northern leaders on the imperatives of tinkering with the current federal structure, which many people believe has inhibited the country in its march towards economic growth and development.
The leaders of thought’s meeting will hold under the aegis of Project Nigeria Movement, led by Prof. Ben Nwabueze (SAN), which is already making overtures to Northern leaders for a meeting to harmonise their views on the controversial issue.
However, one of the Northern leaders expected to be contacted, former Vice-President Atiku Abubakar, was in Okigwe, Imo State at the weekend, lamenting the deepening divide in the country, putting the problem at the door steps of the skewed nature of the Nigerian federation.
“Never have we been this divided in the history of our country,” the former vice-president told students and members of Federal Government College, Okigwe Old Students’ Association, who were celebrating the school’s 40th anniversary.
But hope for a solution to the mounting divisions in the country beckons with the overture to the North for a national meeting on restructuring.
The quest for restructuring has been tied down by lack of consensus among the proponents. While the South appears to have a settled view of how and what should change in the country, the North has not been too forthcoming on the issue, save for clamouring for true federalism.
However, Nwabueze said his group is determined to change that.
A notice of the meeting sent out by the Head of the Secretariat of Project Nigeria Movement (PNM), Mr. Olawale Okunniyi, to members of the leaders of thought, said the meeting would take place in Lagos.
He also said that the PNM’s secretariat was already putting together the machinery for an inclusive platform of both Northern and Southern leaders of thought to agree and negotiate the restructuring of the country through a new constitution.
The Lagos meeting, according to him, would consider the position of the North on restructuring and explore the possibility of harmonising it with that of the south.
He said Nwabueze and some Southern leaders had been carrying out national consultations to facilitate a negotiated consensus among stakeholders on the restructuring of Nigeria, explaining that the PNM meeting would prepare the grounds for a national consensus on restructuring.
A group of Northern leaders of thought named Friends of Democracy (FD) had last week released a Northern proposal on the restructuring of the country, with a suggestion that the country should return to the 12-states structure, among other issues.
Okunniyi said the PNM secretariat had commenced informal talks with the Northern Elders Forum (NEF) secretariat as well as some members of FD on how best to move the ongoing debates and process of restructuring forward.
Okunniyi said consultations were also ongoing with the Pro National Conference Organisation Action Group (PRAG), led by Alhaji Shettima Yerima, and others in the youth organ of the group on how best to facilitate the proposed people-driven independent national conference on restructuring, in the event that all efforts to make the federal government address the agitations for restructuring fail.
PRONACO had last month announced that it had already adopted its 2007 peoples constitution as a working document for its proposed peoples national conference scheduled to commence in January 2018.
“We are not leaving any stone unturned in this matter of democratic constitutional restructuring, which is conceived to help the country achieve political stability and economic prosperity of the diverse peoples of Nigeria. So all efforts and initiatives in this regard are already being synchronised to ensure a productive outcome,” Okunniyi said.
Afenifere Backs Southern Governors
Meanwhile, the Afenifere Renewal Forum (ARG) yesterday asked the Southern Governors Forum (SGF), a bi-partisan platform for the 17 governors in three geo-political zones in the South, to sustain the call for true federalism and devolution of powers.
The ARG, a pan-Yoruba socio-political think-tank, which also set a fresh agenda for the forum, explained the need to ensure sustained collaborations that would guarantee Nigeria’s socio-economic development.

In a statement by its Publicity Secretary, Mr. Kunle Famoriyo, ARG noted that the SGF’s demand for true federalism and devolution of powers was apt and timely.
The SGF had reconvened at Lagos House, Ikeja last Monday, 12 years after its last summit, canvassing true federalism and devolution of powers within a united and indivisible Nigeria.
It also agreed to collaborate in the growth of their economies of the three geopolitical zones in the South, while emphasising the need to develop strategic infrastructure projects within the states in the region.
The ARG commended the timely meeting of the southern governors, saying: “It is a clear indication of the acute need for sustained collaborations that will speak to our development as a people and nation.”
It added that the decision of the SGF to unequivocally demand for true federalism and devolution of powers was the basis for Nigeria’s unity and continued existence.
“There is no doubt that without true federalism, our dear country is bound to plunge deeper into decline across all facets of socio-economic indices.
“Those who are opposed to the restructuring of the governance arrangement of Nigeria, despite the avalanche of evidence for its imperativeness, want to see this country ruined alongside the promising destinies of its citizens.”
Nigeria More Divided
But even as leaders and groups in Southern region continue the clamour for restructuring, Nigeria’s former vice-president at the weekend lamented the growing discontent and agitations in the country, saying there had never been a time that the country had been as divided as it is today.
Speaking while delivering a goodwill message at the Old Students’ Association of the Federal Government College, Okigwe in Imo State, he said though there was no full scale war in the country at the moment, he expressed regret over the level of inter-ethnic discontent, hatred, and hate speech, noting that it was worrisome.
Atiku, who is the grand patron of the school, said the celebration of its 40th anniversary came at a critical time in the country’s history, coinciding with the worsening spate of agitations all over the country.
He said: “All of you must be aware of the recent agitations from different parts of the country, with some groups threatening violence and, in some cases, secession.
“These agitations are the result of a number of factors, which I will not bother going into at this time, although since you are all enlightened men and women, I have no doubt that you are well and fully aware of what they are.
“As a result of these various forces, the Nigeria of today appears more divided than it has ever been before.”
The former vice-president, who traced the origin of Federal Government Colleges popularly known as ‘Unity Schools’ to the end of the civil war, said the idea of setting up the schools was to foster national unity and cohesion.
He said that Nigeria’s best brains were trained at the unity schools not only to be academically sound, but to see themselves as Nigerians rather than as Igbo or Hausa or Yoruba or any other tribe.
He however lamented that such laudable virtues were fast being eroded with the present state of affairs in the country.
“Our country is not at war in the sense of guns and bombs, but the level of inter-ethnic discontent, hatred, and hate speech is at an all-time high,” he said.
Atiku told the students and alumni of the Federal Government College, Okigwe, that Nigeria needed them now more than ever.
He said: “The glory of what was begun here 40 years ago must not be allowed to die. It must be propagated throughout all our country. That is a responsibility that you must all meditate on as you celebrate with one another over the next few days of this grand occasion.
“That is also the responsibility that you must carry on your shoulders as you depart to your various locations across the globe. Whether locally or from the diaspora, you must each and every one of you see yourselves as entrusted with a critical role in mending the cracks that hate and divisions have marked in the social and political life of our great country, Nigeria.
“This is the time to lace your boots. This is the time to roll up your sleeves. This is the time to give back. Nigeria once gave you her best and it is time for Federal Government College, Okigwe, to give her best back to Nigeria.”
Follow Us on Twitter!