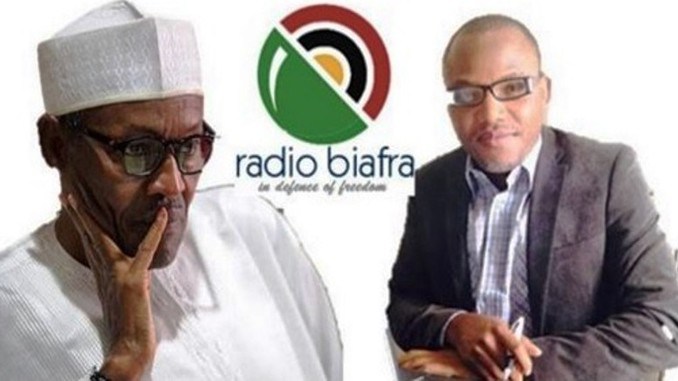 ASJA called on th UK to extradite Nnamdi Kanu to Nigeria,the group claimed the IPOB leader was hiding there
It vowed to occupy the UK embassy if Kanu is not extradited,the Advocate of Social Justice for All (ASJA) has sent a message to the United Kingdom threatening to occupy its embassy if Nnamdi Kanu is not extradited to Nigeria.
In a statement signed by its executive director, Asongo Venatius, the group accused the UK of harbouring a terrorist and said the proper thing to do is to extradite him.
The group claimed that the leader of the Indigenous People Of Biafra (IPOB) fled escaped from Nigeria to Cameroon where he travelled to Malaysia and then to UK.
Read the statement below: “The proper thing is for the UK to have allowed Kanu answer the treason charges against him in Nigeria before making any intervention.
“We find it supremely irresponsible for the UK High Commission in Nigeria to have issued its statement seeking clarification on Nnamdi Kanu when it knows it was in cahoots with the terrorist leader.
“The irresponsible behaviour became diabolic when the UK issued him an emergency travel document in collaboration with crisis merchants. This is the worst form of double standard ever.
“We are at a loss to understand what the UK Mission in Nigeria or even the home country stands to gain by mischievously sinking so low to aid a terrorist and facilitate his sneaking out of the country.
“This is a disgrace to the government and people of the United Kingdom, it is a blot that can only be erased by the government of the UK flushing out Kanu and all other bad elements that are trying to sabotage Nigeria.

“If the UK truly believes in freedom, it must extradite Kanu, who is facing charges in a Nigerian court, so that those who stood surety to perfect his bail conditions do not end up in jail if he fails to show up for his trial.
“Even where the UK has decided to spurn the ties that existed between it and Nigeria, we advise it to revisit the ill advised choice of backing a terrorist against the Nigerian state. “As the UK should have learnt from initially supporting ISIS terrorists, the attacks by these sick minds would eventually take place on its soil.
“The Advocates of Social Justice for All [ASJA] therefore demands that the UK High Commission in Nigeria immediately extradite Nnamdi Kanu to stand trial for his crime before his October 17, 2017 court appearance.
“Failure to do this will see ASJA leading Nigerians to occupy the UK High Commission’s premises in a manner it has never experienced before in any other part of the world.”
Follow Us on Twitter!