Archbishop Onaiyekan reveals those behind story of Nigeria’s Islamisation 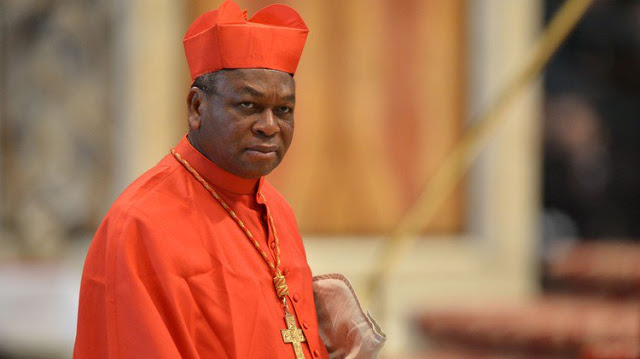 The Catholic Archbishop of Abuja, John Cardinal Onaiyekan has said that those behind the allegation peddled in some quarters about the Islamization of Nigeria were people desperately struggling for positions of authority and power in the country.
He also said that, as far as Nigeria was concerned, there would be no victor between Christians and Muslims if religious war breaks in Nigeria.
He disclosed this in Abuja on Wednesday at the annual conference of the Nigeria Anglican Roman Catholic Commission (NARCC) with the theme; “The Church as Communion, Local and Universal.”
Commenting on the allegations that Nigeria would be Ismalize, he said: “As a Christian, we live in a country where at least so far, we have every right to practice our faith, not just practice it as an individuals privately but publicly and not only practice it but propagate it and that is the right that we have under the constitution.
“We are doing evangelization work and nobody can stop me or others from doing that and I must say no one has stopped me yet from doing that.
“The question of Islamization or no Islamization; in my own opinion depends on what you are talking about and the angle you are looking at. If every time a Muslim is appointed to a position, we say Ismalization, well, that is one way and in that case, therefore, anytime a Christian is appointed, we should also be prepared to hear people say Christianization.”
Continuing, Bishop Onaiyekan said: “In my own opinion, I think this is a matter that is not basically religious, it is a matter of the struggle for positions and power which is not bad because everybody has right in this regard.
“Those who are Christians have right to fight for their right in the Nigerian setup and the right to fight for anybody you think is not properly treated.

“Those who have made these allegations of Ismalization have listed out the reasons why they have made such allegations but I hope you are aware that on the other side too, they have listed out their own.
“This kind of game doesn’t help us because as Christians are listing out allegations, there are Muslims who would come and list out allegations of Christianization, at the end of the day, it is not about Christian or Islam, it is about who gets what job.
“I would advise Christians to be good citizens and they should insist on their rights and there should be enough of always bending over for fear of losing your own selfish advantage.

“I don’t think it would be good for any of us to declare a religious war of Christians against Muslims. I don’t think it is a war that the Christians or the Islams would win, the only person who would win is troublemakers who fish in troubled waters but for the rest of us, all we want to live our lives in peace. They should allow us to live in peace.”
On the lopsidedness in appointment to some key positions, he said: “Those who are our rulers should realize that whatever they do, they should make every effort to make it balanced and not give room for anybody to begin to input on them, intentions of a bias direction for our country.
“This is even dangerous for those concerned, if a group of people who are in government now happened to be Muslim and they are doing things simply to please and to promote Islam, they must get ready for when a Christian would be in power and he would also begin to do the same but is that the way for the country to move forward?
“Those ruling us should be aware that the way country is now, every single appointment, promotions and others are watched by the whole country and they should make sure that they do not give any group or person reasons to think or believe that they are being marginalized or badly treated.
“That is what the President and all those with him swore by whatever book they swore on, that they would run the affairs of this nation without fear or favour.”
The Bishop also advised Christians to fight for their right wherever they find themselves.
“Christians should also fight for their own rights too. If you are in an office and things are not going well and appointments are made in an ill manner, fight for it but if you sit there and you are afraid to talk so that they would not target you and in order for you not to lose the little you have, then you have admitted to being a slave and I don’t expect you to complain,” he said.
On the perceived division and differences in church, he said: “We should make sure that it does not lead us to take actions that are diametrically opposed to what the Christian faith is all about which includes love for one another, goodness and solidarity.
“Divisions amongst Christians would affect the progress of the country and even tie the hands of Christians and make them no longer as capable as they should be.”
Follow Us on Twitter!