Home » news » Amaechi & 25th October: Implications on Rivers State and the Nation A Decade After (Part One)

Amaechi & 25th October: Implications on Rivers State and the Nation A Decade After (Part One) 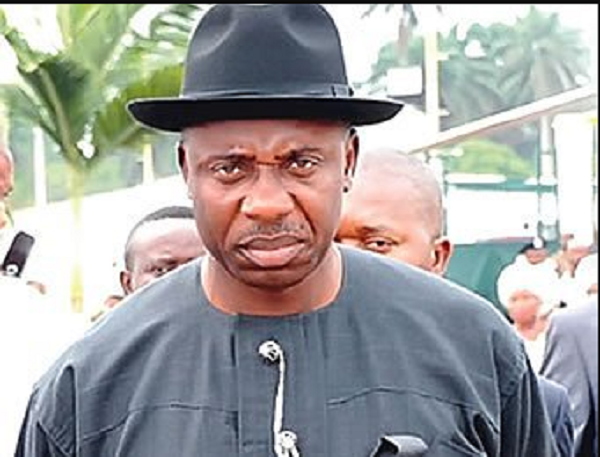 Amaechi’s vindication came with the 25th October, 2007 ruling by the Nigerian Supreme Court declaring Rt. Hon. Chibuike Rotimi Amaechi not only the authentic flag-bearer of PDP but also declaring that he be sworn in to immediately replace Omehia who had previously been sworn in on May 29, 2007 as the Governor of Rivers State.  Thus, he became the first person to occupy the office of governor in the country without technically standing for election. In explaining the ruling, the Supreme Court has since stated that it is the party that contests elections and that the PDP won the gubernatorial elections, and that, consequently, Amaechi, being the rightful candidate, should assume power as governor.
Three years after: the two celebrations on the Judgment at Port Harcourt
On that fateful day at his spacious mansion situated in GRA, Port Harcourt constructed within five months of his aborted rule as the Governor of Rivers State; Sir Celestine Omehia and his supporters gathered to mourn what they termed as a dark Thursday where the Supreme Court ousted Sir Omehia as the Governor of Rivers State; at the same date and time his cousin, Rt. Hon Chuibike Rotimi Amaechi met with his own supporters at the hall of the Rivers State House of Assembly where he held forte for eight years as the Speaker to celebrate what he termed an Act of God.
To Sir Celestine Omehia the ruling of the Supreme Court ousting him from office on that 25th October, 2007 was a dark and black Thursday while on the other hand; Rt. Hon. Amaechi sees it as divine. Speaking during the commemoration, Sir Omehia said, it was a dark Thursday that would never be wished away. “Today we are here for a special mission in commemoration of what happened on the 25th day of October 2007”, Omehia stated in his speech, “That was the day that the people of Rivers State were disenfranchised, the day the people of Rivers State were denied of their votes, the day I will call the dark Thursday of the year and it will ever remain dark in the history of Rivers politics. It is a dark Thursday in the history of democracy in Nigeria. That was the day that the constitution of Federal Republic of Nigeria was turned upside down for personal interest. That was the day people used their personal interest to destroy what 140 million people agreed to be in our constitution”.
Conducting a service tagged “Take over service” men of God, led by Bishop Emma Ogu, prayed for the return of Sir Omehia to take over the mantle of leadership of the State. Bishop Ogu said the dark Thursday would be redeemed by the service they have conducted within 68 days when Sir Omehia will be restored back to power. Funny enough, this prophecy and prayer never came to pass as Amaechi not only served his first term of four years but served his second tenure accordingly.
On the other divide of the town, Rt. Hon Chibuike Amaechi while addressing his own supporters in what he titled ‘...You Must Not Sleep On Your Rights’; Speaking at the colloquium on jurisprudence and the rule of law in Rivers State, an event put together to celebrate four years of his supreme court victory of Thursday, October 25, 2007, the governor, who challenged all permutations and alliances against his governorship ambition before and after the April 14, 2007 governorship election in Rivers State urged Nigerians never to sleep on their rights. The governor faulted the Nigerian masses for their inactivity, noting that the populace largely and easily appears helpless in the face of challenges, especially before the powers that be. He urged the Nigerian populace to stand up and take their rights from politicians rather than allow them to wrongly meddle in their destiny. He, however noted that only Senator Ifeanyi Araraume and himself summoned up the courage to challenge the then almighty power and won their liberation through the courts, given which effort his governorship dreams materialized, while those who went to sleep on their rights never made it. He corroborated earlier statements by Chief Godpower Ake, the PDP chairman in the State that most PDP members and the Nigerian populace were helpless before former president; Chief Olusegun Obasanjo whose decisions could hardly be challenged and who had then declared that Amaechi's governorship bid had a k-leg.
Amaechi is not the type of leader who will suggest to his followers to take any risk without him being at the forefront of such a risk, that is why Ken Kesey after careful study of his uncommon risk and feats embarked upon to revalidate his mandate stated and I quote, “You don’t lead by pointing and telling people some place to go. You lead by going to that place and making a case.”  The fact remains that to be a good leader, you sometimes need to go down the untraveled path. Being bold in the face of uncertainty will help give your team courage and motivate them to keep striving when the going gets tough and this is the hallmark of Amaechi and his type of politics.