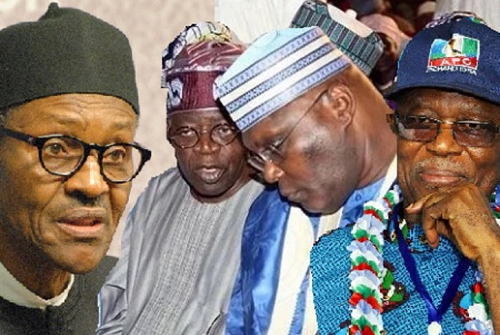 Ahead of the 2019 presidential election, a national leader of the ruling All Progressives Congress, APC; Asiwaju Bola Ahmed Tinubu and a former Vice President, Alhaji Atiku Abubakar, among others remain unyielding in their stance that the embattled national chairman, Chief John Odigie-oyegun must be removed as the national Chairman of the party.
The agitated chieftains of the ruling All Progressives Congress, (APC) will storm Abuja on Monday and Tuesday for the meetings of the national caucus and National Executive Committee, (NEC) of the party after several months of delay.
According to the Nigerian Tribune, the caucus meeting promises to be stormy as it will set agenda for the NEC meeting tomorrow.
Expected to attend the national caucus and leading the anti- Odigie Oyegun forces are former Lagos state governor, Asiwaju Bola Ahmed Tinubu; former interim chairman of the party, Chief Bisi Akande, former vice-president and presidential hopeful, Atiku Abubakar.
Equally in the camp are the governors disenchanted with the former Edo state governor administrative style.
By virtue of Article 12.5 of the APC Constitution, (October 2014, as amended)  past and serving presidents and former vice-presidents, serving and former governors, present and former  Senate Presidents and Speakers of the House of Representatives, among others who are members of the party, belong to its national caucus.
Investigation revealed that while the likes of Bola Tinubu, Akande and Atiku Abubakar remain unyielding in their stance that the embattled national chairman must vacate his position for sanity to return to the heavily polarized party and are also insisting on a convention to be conducted this year,   the embattled Oyegun has succeeded in polarizing the camp of the governors while the Presidency has equally reined in some of them. Checks revealed that ahead of today’s national caucus and tomorrow’s NEC meetings, four of the governors met with President

Muhammadu Buhari last Friday at the presidential villa. Kaduna state governor, Nasir El- Rufai, led his Zamfara state counterpart, Abdul Aziz (who incidentally is chairman Nigerian Governors’ Forum) to the meeting. Also in the team were Mohammed Abubakar and Abdullahi Umar Ganduje, governors of Bauchi and Kano states, respectively. Their brief, according to a party source is to talk to their colleagues to seek soft landing for embattled Oyegun.
In the camp of the adamant governors are those from the south west zone, the political base of the estranged national leader of the party, Bola Tinubu.
Recall that the governors from the zone penultimate week boycotted a meeting between the APC Governors’ Forum and certain principal officers of the national assembly called at the instance of the party national chairman.
Meetings of the two statutory organs of the party always precede a meeting of its highest organ, the national convention where major decisions on the party policies, programmes, including ratification of the amendment of the party constitution are taken. Article 13 (1) of the party Constitution empowers the convention as the final authority on election or remove of national officers of the party, election of its presidential candidate , amendment of its constitution and to ‘’Take any action as may be conducive to the promotion of the aims and objectives of the Party as laid down in this Constitution.’’
Findings revealed that Chief Oyegun is pushing for a postponement of the convention till March 2018, when his tenure is expected to terminate.
This would enable him nib in the bud the plot by aggrieved chieftains of the party to seek his ouster through a vote of no confidence at the mid -term convention earlier fixed for November.
Follow Us on Twitter!