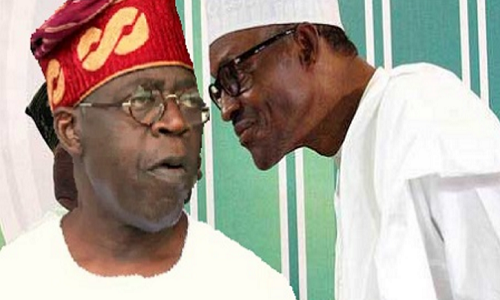 As 189 groups out of several groups which worked for the emergence of President Muhammadu Buhari in 2015 met in Abuja last week to endorse the President for re-election in 2019 under the aegis of Buhari Support Group (BSG), there are indications that members of the ruling All Progressive Congress (APC) loyal to former Lagos State governor, Asiwaju Bola Tinubu may be on collision course.
At last Friday’s event, the Vice President Prof. Yemi Osinbajo was represented by the minister of the Federal Capital Territory (FCT), Muhammed Musa Bello. In attendance were the governors of Bauchi State Mohammed Abdullahi Abubakar, Kogi state, Yahaya Bello and Plateau state Simon Lalong . The event, hosted by the Customs CG Hameed Ali (retd) and chaired by Senator Olorunnibe Mamora, was also attended by the ministers of Defence, Niger Delta, Trade (State), Health (State), Senator Magnus Abe, Umana Umana, Festus Keyamo, Ita Enang, and Muhammad Sanusi Dagash, among other APC bigwigs. However, notable absentees were Southwest governors and core loyalists of Tinubu.
Nigerian NewsDirect gathered that this might not be unconnected with the planned presidential declaration of Tinubu, who had been holding a series of meetings and consultations over his bid to take over the presidency in 2019.
Sources close to the former Lagos governor reliably informed Nigerian NewsDirect that Tinubu was also putting together a team, preparatory for the race and had developed an elaborative strategic plan to make a bold bid for the coveted office.
In the meantime, a source who spoke with us in confidentiality that  three Northerners have been penciled down as running mate for Tinubu’s 2019 project, they are Borno State governor, Kashim Shettima,  Sokoto State governor, Aminu Tambuwal and Senator Abu Ibrahim who represents Buhari’s Katsina South Senatorial District. None of the three leading men who are power brokers in APC were at the event on Friday.
Abu Ibrahim, leader of the Buhari Support Group (BSG), alongside the Senate Leader, Ahmed Lawan were at Aso Rock to brief the President what transpired at the occasion few minutes after the end of the program.
Ibrahim said, ”We came here as members of the national committee of the Buhari support group. This is an amalgamation of about 189 different support groups that had worked for President Muhammadu Buhari and the APC to win the 2015 general election,” he said.
“We have been holding meetings, discussing the problems of this country, Nigeria. So, we thought it was high time we meet with the president to intimate him about the activities of the group.

“We discussed with him about the plans to improve the situation in Nigeria. Mr President was very pleased with our programmes.”
Ibrahim said though the issue of 2019 did not come up at the meeting, the group believes Buhari could ensure the progress and stability of the nation.
Asked why he has such conviction, Ibrahim said, “Because l believe in his philosophy and l believed he can solve the problems of this nation.”
Ahmed Lawan, majority leader of the senate, who joined BSG during the visit, also said Buhari would have no option but to contest the 2019 election.
Lawan said Buhari would have to “continue the good work he has started”.
“We have issues we think that the administration will be dealing with very successfully, now that we have economic recovery and growth plan which encapsulates everything we need to move Nigeria forward,” he said.
“I believe we are going to achieve those things that we set for ourselves at the moment.
“I also believe that the future is bright and by the grace of God, by 2019, we would have achieved so much in this administration and Mr President will have no option but continue the good work he has started.
“We will continue to identify with and support all the programmes that this administration has set forward.
“And l believe that we have every justification to be happy because, the president campaigned on three major pillars of anti- corruption, fighting the insecurity across the country and revitalizing the economy of Nigeria.
“It has been a very good journey so far and also we believe that Mr. President and Nigerians have a future beyond 2019. What he has started, by the grace of God, he should be able to complete, up to 2023.”
However, a former member House of Representatives a close ally of Tinubu, Hon Tunde Abudu-Balogun said Tinubu had the right to contest as a citizen of this country.
Abudu-Balogun told Nigerian NewsDirect that the constitution guarantees every Nigerian who meets constitutional requirement to contest for the office of the President.
However, Abudu-Balogun refused to comment on what would be the outcome if Tinubu continued with his presidential bid now that Buhari has shown interest to contest the 2019 election.
Similarly, the Spokesman of APC in Lagos, Joe Igbokwe did not respond to text sent to him and cut off our correspondent line when he was called for response.
However, the  National Publicity Secretary of the Peoples Democratic Party (PDP) Prince Dayo Adeyeye , insisted that only rigging and manipulation of elections will save the party in 2019 irrespective of the candidate the party fields in the presidential election.
Prince Adeyeye urged Nigerians to be vigilant, stating that on the basis of performance, the APC will not retain power in the next general election. “The only way they can retain power in 2019 is by rigging and that is why we are enjoining Nigerians to be on their guard.
“We have seen that most of the elections conducted by the Buhari administration were inconclusive or marked with irregularities,” he said, adding that in 2019, there were reasons to believe the elections would not be credible. “There is no assurance that these people will deliver free and fair elections and that might sound the death knell for our democracy,” he warned.
Follow Us on Twitter!