Why Nigeria Cannot Be Better Under This Federalism - Tinubu Counters Buhari, Osinbajo; Lends Voice To Restructuring 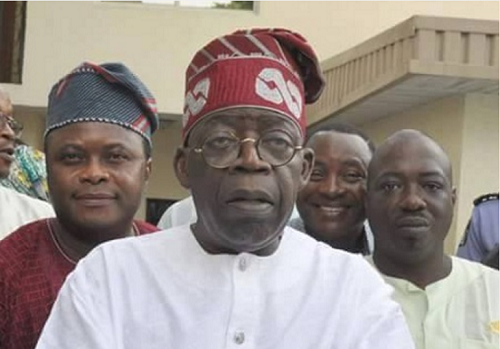 Asiwaju Bola Ahmed Tinubu, the national leader of the ruling All Progressives Congress, APC has said the current government of Federalism being run by Nigeria will not make the country better for all, hence he lent his voice to restructuring, which many have been clamouring for.
Tinubu’s assertion followed repeated pronouncements by President Muhammadu Buhari and Vice-President Yemi Osinbajo that Nigeria’s unity is settled and not open to negotiation.
Tinubu said restructuring will foster the much-needed balance country and dowse the clamour by some section for secession. He, however, expressed his stance against the split of the country.
The former Lagos State Governor, who was the keynote speaker at the annual dinner of the King’s College Old Boys’ Association, on Saturday, described Nigeria as a nation that had not sufficiently defined its governance, Punch Newspaper published earlier.
Tinubu was quoted by Punch Newspaper to have said, “We are like the bewildered couple who has got their marriage licence after a lavish wedding; yet neither of them really understands the meaning of marriage or their roles as husband and wife in it.
“Legally, they are married but functionally, their union is a crippled one. This couple will be at loggerheads until somehow they forge an agreement on what type of home they want and what are their respective duties in making that home come into existence.

“It is a rather curious lapse that a nation with such diversity as ours has not taken the time to give our legal marriage its proper functional underpinning. In other words, we all lined up to call ourselves Nigerians without gathering to discuss what it meant.
“We may be defined by political borders and boundaries but we have not glued ourselves to collective purpose and vision. Too many of us are born in Nigeria but not of it. Thus, our society is not a collective enterprise as important to each of us as our own personal endeavour. It is a platform, an arena, to claim whatever one can by whatever means available.
“Thus, we argue over matters that long ago should have been settled. The longer such fundamental questions fester, the more extreme become the proposed answers. Thus, we have people clamouring for secession in one part of the country and the murmur of such a course grows stronger in other sections.”
Tinubu noted that blame and recrimination had become the political currency, while statesmanship had fallen in short supply as the dominant urge was to confront instead of reconcile.
“Constitutionally, we are a federation of 36 states. However, the vestiges of past military rule continue to haunt the democratic road we hew. We function like a unitary state in many ways. We cannot become a better Nigeria with an undue concentration of power at the federal level. Competition for federal office will be too intense, akin to a winner-take-all duel.
“Those who lose will bristle at the lack of power in the periphery they occupy. They will scheme to pester and undermine the strong executive because that is where they want to be. The executive will become so engaged in deflecting their antics, that it will not devote its great powers to the issues of progressive governance for which such powers were bestowed.

“Things will be in a constant state of disequilibrium and irritation. Such a situation tends toward the maintenance of an unsatisfactory status quo in the political economy. It is against reform.
“It would be better to restructure things to attain the correct balance between our collective purpose on (the) one hand and our separate grass-roots realities on the other. We must listen to what is being said so that we can determine what is really meant,” he added.
Tinubu, however, noted that there were opportunists on the path to achieving balance in the polity.
He said, “Let us be frank. Many who cry separation do so because their personal ambitions will be better served by such a thing. They believe they will have greater chance at political power under a different arrangement. Yet the cry for separation has gained traction among average people. This is due to the chronic failure of government to meet basic aspirations.
“If over the years, government had delivered on the promise of growth, prosperity, and justice, those calling for such extreme remedies would be but a small fringe of little consequence.
“Our task is not to condemn but to listen and understand. I care not at all for this proposed solution. But I dare not discount the concerns and problems that have led many people into advocating such a thing.
“Here, I want to plainly state my position. I am a firm believer in Nigeria. I believe this land will become a great nation and a leader among other African nations. We can resolve our dysfunctions in a manner that will make this nation rise as a standard of decency, justice and prosperity for all Nigerians.”