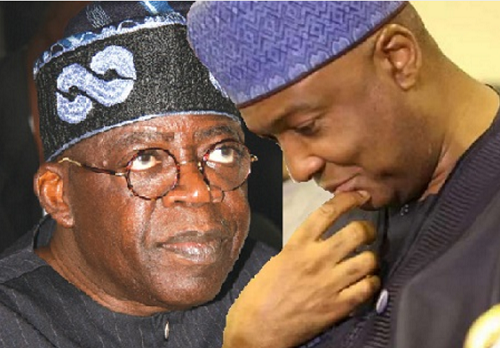 As President Muhammadu Buhari returned to London last week for an undisclosed reason after participating in the 72nd Session of the United Nations General Assembly in New York, investigation by Nigerian NewsDirect  revealed that top presidential hopefuls in the ruling All Progressive Congresss (APC) have started mobilizing their supporters ahead of 2019 presidential election.
However, unlike previous times when Buhari would hand over power to Vice-President Yemi Osinabjo   while travelling  for medical vacation , he didn’t send any letter to that effect to the Senate as his Spokesman, Femi Adesina had stated last Friday announced that the president would stop over in London before returning home.
“President Buhari will transit through London on his way back to the country,” Adesina said.
It was not clear what his mission to London was or how long the president would stay there but he had recently returned to the country from the United Kingdom after spending over three months on medical vacation to treat an undisclosed ailment.
A source told Nigerian NewsDirect that the President would return to the country on Thursday which is few days before the country’s 57th independence anniversary billed for Sunday. The President is also “.billed to participate in the traditional Independence Jumaat service at the national mosque on Friday.
However, the source did not say specifically if the President would return to London after Independence Day celebration on Sunday.
“All I can tell you is that the President will return to the country before independence anniversary”.
In the meantime, powerful presidential aspirants in APC have been trying to outwit themselves as it is becoming clearer that the president may drop the idea of contesting for second term due to ill-health.
Presidential aspirants under APC platform include, former Vice President, Atiku Abubakar, Senate President, Bukola Saraki, National leader of APC, Bola Tinubu, former Kano State governor, Rabiu Kwankwaso, Zamfara state governor the powerful Nigerian Governors Forum, Alhaji Abdul’aziz Abubakar Yari among others. Governors Aminu Tambuwal of Sokoto, Rochas Okorocha of Imo, Kashim Shettima of Borno and Mallam Nasir El-Rufai of Kaduna State are also suspected to have presidential ambition but are waiting to know if Buhari would vie for second term.
However, investigation by our Correspondent revealed that Atiku, Saraki, Tinubu and Kwankwaso already have set machinery in motion to actualize their presidential ambition.
Few days after Buhari travelled, Saraki fired the first salvo by describing the proscription of the Indegenous People  of Biafra  (IPOB) led by Nnamdi Kanu as illegal. The army, whose Commander-in-Chief is President Buhari had insisted that IPOB is a terrorist organization and carried out operation code named “Python dance” in Aba.
Saraki, relied on section 217 subsection 2(C) which states that the Army while being used for suppressing insurrection and acting in aid of civil authorities to restore order when called upon to do so by the President, but subject to such conditions as may be prescribed by an Act of the National Assembly.

He had met with South East senators over the IPOB issue alongside his deputy, Saraki got all the South East Senators votes when he contested for Senate President’s seat two years ago.
Few days after Saraki’s pronouncement, Tinubu  called for restructuring of the country stating that  restructuring will bring much needed balance to the country.
Tinubu said, “Things will be in a constant state of disequilibrium and irritation. Such a situation tends toward the maintenance of an unsatisfactory status quo in the political economy. It is against reform.
“It would be better to restructure things to attain the correct balance between our collective purpose on (the) one hand and our separate grassroots realities on another. We must listen to what is being said so that we can determine what is really meant,” he added.
Tinubu’s assertion followed repeated pronouncements by President Muhammadu Buhari and Vice-President Yemi Osinbajo that Nigeria’s unity was settled and not open to negotiation.
Tinubu had revealed his interest in vying for the topmost job in the country on the condition that Buhari would not run for second term.
Former Vice President had also been galvanizing his supporters all over the country. Last week, one of the staunch supporters of Atiku who was a former National auditor of Peoples Democratic Party (PDP), now APC Chieftain, Chief Bode Mustapha described as height of sycophancy for anyone to call on Buhari to run for second term and added that those asking Buhari to seek a second term want him dead.
Source: Nigerian News Direct
Follow Us on Twitter!