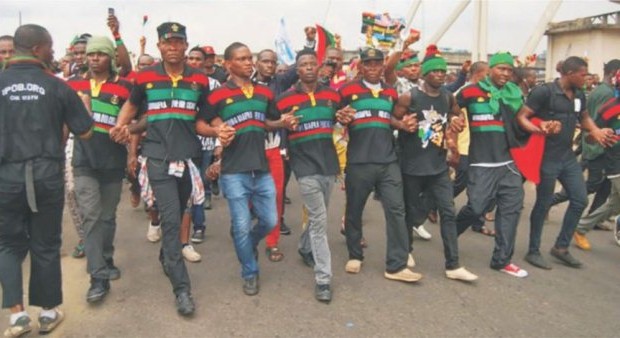 The Indigenous People of Biafra (IPOB) yesterday declared that no intimidation or harassment from any quarter will make it retreat.
The group described its proscription by the Southeast governors and the declaration of it as a terrorist organisation by the Defence Headquarters as actions that could not stand.
IPOB said a referendum to determine a sovereign state of Biafra would compensate the people.
In a statement yesterday, IPOB’s Media and Publicity Secretary Emma Powerful, said it wondered why herdsmen that had several times caused havoc in various parts of the country had not been declared a terrorist organisation.

IPOB said: “It is also on record that till date, no police commissioner or governor in the South East or South South has dared to rise up against the fourth deadliest terrorist group in the world we know as Fulani herdsmen.
“When Fulani herdsmen attacked Enugu, Anambra, Ebonyi and Abia states, none of the police commissioners in these various states or any of these governors now supporting genocide against their people ever uttered a word in opposition.
“82 Division of the Nigerian Army at Enugu, a mere 13 kilometers from where Fulani herdsmen armed with sophisticated weaponry attacked innocent villagers, did not rise up to aid Enugu people.
“They did not storm the hideout or known settlements of Fulani herdsmen in Enugu. There was no stop and search of Fulani people. There were no arbitrary arrests of Fulani men. Fulani women were not carted off to be raped and dehumanised by Nigerian soldiers.
“Fulani leaders and Arewa North never rose up in condemnation of Fulani herdsmen.

“We must not stop to let the police and Nigeria DHQ know that Biafra restoration project, led by Mazi Nnamdi Kanu, cannot be moved or deterred by any threats or killing of unarmed innocent civilian populations.
“We also want to let them understand that they don’t have the power to declare the peaceful and nonviolent IPOB a terrorist organisation.
“It is unfortunate that the Nigerian police and DHQ cannot differentiate between freedom fighting and terrorism yet most of them claim they are graduates.”
“Every right thinking person must continue to ask South East governors why they allowed envy and jealousy to overwhelm them to the point of inviting an entirely foreign army full of Hausa Fulani men to come to our land to kill us because they lost the masses to IPOB”
“The ranting of some of the cowardly governors of South East zone, especially Willie Obiano and Okezie Ikpeazu, to the effect that they will continue to kill innocent unarmed people fighting for their freedom in a peaceful manner but swore to protect the children of his slave masters in the North, is meaningless to us.”
“IPOB is not in the habit of attacking anybody or group of persons and will never do anything to bring harm to non-indigenous Biafrans residing in Biafraland. We are civilised people and not as blood thirsty as the Arewa North.”
“We will not fail to remind the Southeast governors that they have lost the battle with IPOB under the leadership of Mazi Nnamdi Kanu, especially Okezie Ikpeazu of Abia State and Willie Obiano of Anambra State.
“IPOB cannot and will not succumb to pressure resulting from intimidation, arrest and brutal murders going on now all over Abia, Anambra and Rivers states at the moment.
“We have gone too far ahead to be bothered by the sound of bullets, bombs and fighter jets waiting to rain bombs on us. Nobody can stop the agitation for Biafra freedom at this point in time, only a referendum can do that.
“We are putting our people and the entire world on notice that we are not relenting until this or any other Nigerian government and her cabals give us a date for referendum.”
“Every family member of IPOB is advised to be patient because we are at the stage of last fight against the internal forces of darkness that have held us hostage for generations against our will.”