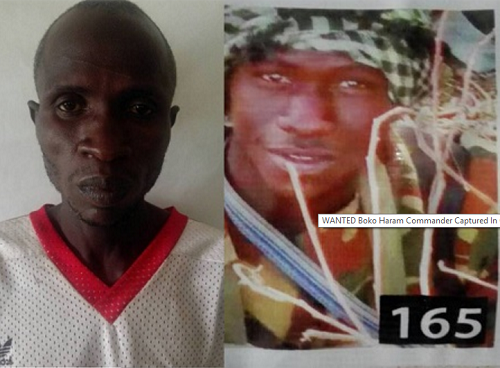 Idris Ibrahim Babawo, a wanted Boko Haram suspect has been apprehended in Ondo state, Sahara Reporters learned on Tuesday.
Ibrahim, aged 42, was apprehended at Isua Akoko in Akoko South East Local Government Area of Ondo state by some local vigilante group.
The wanted Boko Haram suspect nicknamed "Idoko" is on believed to be number 156 on the lists of terrorists declared wanted by the Nigerian army.

SaharaReporters learned that the suspected Boko Haram member was traveling from Bauchi state to Ibafo in Ogun state when he was nabbed in Ondo state.
Akinwunmi Gideon, the Ondo state Commandant of the Vigilante Group of Nigeria (VGN) who confirmed the arrest to our correspondent in Akure, said the suspect was traveling through Ondo state in the white bus when he was apprehended.
Mr. Gideon said the wanted Boko Haram suspect was arrested by local residents in Isua Akoko after causing a scare and later handed over to the members of the vigilante group in the area.
"After his arrest, the people handed him (suspect) over to our local commander, Mr. Eyinju Daniel in Isua Akoko," he said.
He added that the action of the suspect who was journeying from Bauchi State but decided to stop over in Ondo state made the people raised suspicion and alarm.
According to him, the vigilante group in the state immediately handed over the suspect to the Ondo State Police Command to avoid being lynched by angry residents.

Femi Joseph, spokesman of the Ondo Police command confirmed the arrest to SaharaReporters in a phone chat.
Mr. Joseph revealed that the suspect who was fleeing Bauchi state and had to stop in Isua Akoko due to a mechanical fault that developed in a vehicle he was traveling with.
He explained that police decided to hand over the suspect to the 32 Brigade Artillery of the Nigeria Army in Akure for further investigation.
Meanwhile, the Nigeria Army confirmed the arrest of the wanted Boko Haram suspect in a statement issued by the Director of Army Public Relations, Brigadier General Sani Kukasheka Usman.
The statement read, “The Nigeria Police Ondo State Command on Sunday 24th September 2017 at about 2.00pm, arrested a declared wanted Boko Boko Haram Terrorist group member, Idris Ibrahim Babawo aged 42, that goes by the names “Idoko” and “Nagada”.
“He [suspect] was handed over to the 32 Brigade, 2 Division, Nigerian Army, at about 2.00pm today Monday 25th September 2017 by the Ondo State Command of the Nigeria Police.
“Preliminary investigation shows that the terrorist kingpin hailed from Chinade village, Katagum Local Government Area of Bauchi State. He escaped from the North East due to the military onslaught on the terrorists with a view evade arrest and prosecution. But nemesis caught up with him" Usman said.
Source: SH
Follow Us on Twitter!