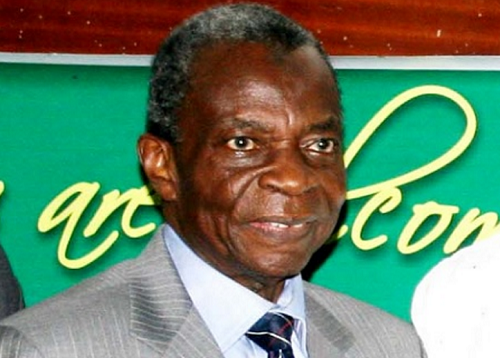 The retired Justice Ayo Salami sacked by former President Goodluck Jonathan has been appointed by the National Judicial Council NJC) has appointed as the head of a 15-member committee to monitor courts’ handling of corruption cases.
Recall Ayo Salami was forcefully sacked by Jonathan over an election-related case in Osun State where Governor Rauf Aresgbesola was declared the winner against the Then Peoples Democratic Party Governo, Chief Olagunsoye Oyinlola.
Despite public outcry that Justice Ayo Salami
s sack was political and unjust, Jonathan ensure his sack.
He was yesterday appointed by the Chief Justice of the Federation, Justice Walter Onnoghen.
The committee, named: The Corruption and Financial Crime Cases Trial Monitoring Committee (COTRIMCO), is also expected to drive the NJC’s” new policy on the anti-corruption war.
NJC’s Director of Information Soji Oye, in a statement yesterday, said the decision on the committee’s composition was taken yesterday at the NJC’s 82th meeting in Abuja.

He said the NJC has directed heads of courts to cooperate with the committee and furnish it with information about corruption cases pending before them.
Oye added that the NJC has also asked the Court of Appeal and the Supreme Court to set aside a date every week for the hearing of appeals relating to corruption cases.
He said the committee’s primary functions include:
regular monitoring and evaluation of proceedings at designated courts for financial and economic crimes nationwide;
advising the Chief Justice of Nigeria on how to eliminate delay in the trial of alleged corruption cases;
giving feedback to the council on progress of cases in the designated courts, conduct background checks on judges selected for the designated courts; and
evaluating the performance of the designated courts.
Other members of the committee are Justice Kashim Zannah (Chief Judge of Borno State), Justice P. O. Nnadi (CJ, Imo), Justice Marshal Umukoro (CJ, Delta), Justice M. L. Abimbola (CJ, Oyo State), President of the Nigerian Bar Association (NBA), Abubakar Mahmoud (SAN) and four former NBA Presidents – Wole Olanipekun, Olisa Agbakoba, Joseph Daudu and Augustine Alegeh (all Senior Advocates).
Others are Dr. Garba Tetengi (SAN), Mrs. R. I. Inga, representative of some non-government organisations, representative of the Institute of Chartered Accountants of Nigeria (ICAN) and NJC’s Secretary, Gambo Saleh.
Follow Us on Twitter!