Home » news » The UNTOLD, The Top Secret Why The US Actually Declared IPOB As Non-terrorist Group - FG, ...Gazettes, To Seize All IPOB's Properties

The UNTOLD, The Top Secret Why The US Actually Declared IPOB As Non-terrorist Group - FG, ...Gazettes, To Seize All IPOB's Properties 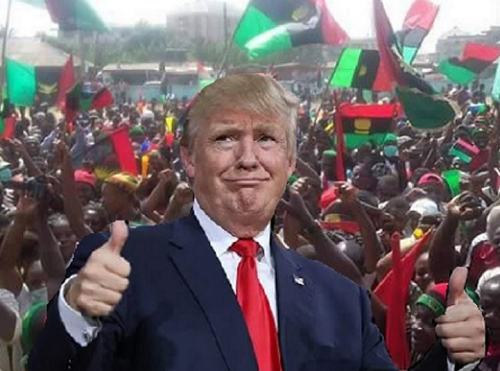 The Special Assistant to President Muhammadu Buhari on Prosecution, Chief Okoi Obono-Obla has revealed that the United States of America do not regard IPOB as a terrorist organization because it was a registered organization in California.
According to Punch Newspaper, Obla said without being registered in Nigeria, the group’s operation in the nation was criminal under the Company and Allied Matters Act 2004.
He said, “I want to add the USA may say IPOB is not a terrorist organisation by US Law because it is a registered business concern in the State of California in the United States!

“However by Nigerian law, a foreign company, which is not registered by the Corporate Affairs Commission by the provisions of Section 53 of the Companies and Allied Matters Act 2004 and by Section 54 of the Companies and Allied Matters Act, is operating illegally.
“It is a criminal offence for a foreign company to operate in Nigeria without registration! So, all this while IPOB was operating in Nigeria illegally!”
Meanwhile, The Federal Government has gazetted the order of the Federal High Court in Abuja which proscribed the Indigenous People of Biafra and designated the group as a terrorist organisation.
The gazetting was part of the requirements imposed on the Federal Government by the court to finalise the proscription of the group.
The Acting Chief Judge of the Federal High Court , Justice Abdu Kafarati, had, on September 20, issued the proscription order upon an ex parte application by the Attorney General of the Federation and Minister of Justice, Mr. Abubakar Malami (SAN).
Justice Kafarati, who heard the AGF’s motion in chambers, had, in addition to directing the Federal Government to gazette the order, ordered it to publish it in two national dailies.
With the gazetting, it is left for the Federal Government to publish the proscription order in two newspapers.
Meanwhile, our correspondent learnt on Monday that following the gazetting of the proscription order, the Federal Government, through the Central Authority Unit of the Federal Ministry of Justice, had commenced moves to notify banks, Nigerian embassies abroad and foreign missions operating in Nigeria from further relating with IPOB.
Meanwhile, IPOB, through its lawyer, Mr. Ifeanyi Ejiofor, had, barely 48 hours after the court’s proscription order was issued, filed a motion on September 22 (Friday) before the same court, seeking the nullification of the said order for being made by the court without jurisdiction, among other alleged defects.
However, a copy of the gazette, sighted by our correspondent on Monday, showed that the five-page document was printed and published by the Federal Government Printer in Lagos on September 20, 2017, the particular date the Federal High Court in Abuja issued the proscription order.
The document was signed by the AGF.
It is titled, ‘Terrorism (Prevention) (Proscription Order) Notice, 2017’ is contained in Volume 104 of the Federal Republic of Nigeria Official Gazette.
Apart from its cover, the document has four pages, A69 to A73 and it is the ‘Government Notice No. 85’.
The three orders in the gazette notified the public of the “proscription order”; “liability for participation in proscribed group’s activities”, and the “short title of the order”.
It notified the public of the proscription of IPOB and warned that any person or group of persons participating in the activities of the group “in any manner” would be violating the provisions of the Terrorism (Prevention) Act, 2011 as amended in 2013 and would be liable to be prosecuted.
The gazette, with commencement date of September 20, 2017, read in part, “NOTICE IS HEREBY GIVEN that by the Order of the Federal High Court, Abuja, in suit No. FHC/ABJ/CS/871/2017, dated September 20, 2017 as per the schedule to this Notice, the activities of the Indigenous People of Biafra are declared to be terrorism and illegal in any part of Nigeria, especially in the South-East and South-South regions of Nigeria as proscribed, pursuant to Section 2 of the Terrorism (Prevention)Act, 2011 (as mended).
“Consequently, the general public is hereby warned that any person or group of persons participating in any manner whatsoever in any form of activities involving or concerning the prosecution of the collective intentions or otherwise of the said groups will be violating the provisions of the Terrorism (Prevention) Act, 2011 (as amended) and liable to prosecution.
“This Notice shall be cited as the Terrorism (Prevention) (Proscription Order) Notice, 2017.”
Also published in the ‘Schedule’ to the gazette were the orders issued by the court on September 20.
Sources in the Federal Ministry of Justice told The PUNCH on Monday that whichever institution, foreign or local and foreign nation that failed to respect Nigeria’s stance on the group would be designated as “unfriendly to Nigeria”.
Our correspondent also learnt that President Muhammadu Buhari was expected to appoint an Administrator, who would oversee the forfeiture of IPOB’s assets, home and abroad, to the Federal Government.
According to the sources, the forfeiture of IPOB’s assets would no longer require any court order.
They explained that IPOB, having been designated unlawful as stipulated under Section 62 of the Criminal Code Act, the President was empowered to appoint an administrator to oversee the forfeiture of the group’s assets.
One of the sources added, “With the gazette done, the Central Authority Unit of the Federal Ministry of Justice will notify banks within and outside the country to stop relating with IPOB directly or indirectly.

“Foreign missions operating in Nigeria and Nigerian embassies abroad will also be notified.
“The President is also expected to appoint an administrator for the forfeiture of IPOB’s assets since the group has been declared unlawful in line with Section 62 of the Criminal Code Act.
“The forfeiture will no longer require any court order.”
The Special Assistant to the President on Prosecutions, Chief Okoi Obono-Obla, confirmed to our correspondent the moves being made by the Federal Government following the proscription of IPOB.
“This is the procedure contemplated by section 2(1)(c) of the Terrorism (Prevention) Act 2011 as amended in 2013, that the prosecution shall be published in the official gazette of the Federal Government,” Obono-Obla told The PUNCH on Monday.
“This is final that IPOB is an unlawful society, it’s an illegal society. So, the Federal Government of Nigeria and the President will subsequently appoint an administrator to take over all the properties belonging to IPOB in Nigeria and abroad.”
He said the gazetting was a warning to foreigners promoting IPOB, adding that those who continued to subscribe to the group’s membership would be prosecuted.
He stated, “This is a warning not just to IPOB but all the groups that have been threatening national security and corporate existence of Nigeria that the Federal Government will clamp down on such groups.”
Reacting to the contrary stance of some foreign nations on the status of IPOB, Obono-Obla said, “What the foreign countries are talking about is international politics. International politics is no law and it does not have anything to do with Nigeria.
“Any country that is a foreign friend must respect the laws of Nigeria. If you don’t respect the laws of Nigeria, then we treat you like an unfriendly country. There are diplomatic consequences for a country treated as unfriendly.
He stressed that the government would notify Nigerian embassies abroad in order to help to cut off the funding of the group, adding that banks, which violated the proscription order, would be prosecuted.
Earlier in his statement released late on Sunday, Obono-Obla described as inconsequential the refusal of some countries to classify IPOB as a terrorist group, despite Nigeria’s recent proscription and designation of the group as a terrorist organisation.
He added, “So, it is a terrorist organisation! This is also an organisation that was hounding and killing Nigerians in Rivers and Abia states before the military intervention!
“This is a group that were burning police stations; killing police officers, throwing bombs at military convoys, threatening to make the country ungovernable; threatening to stop governorship election in Anambra State!
“Most importantly, a court of competent jurisdiction – the Federal High Court as presided over by the Acting Chief Judge, Justice Abdul Kafarati – upon an application filed by the Honourable Attorney General of the Federation hinged on Section 2 (1) (a) & (b) of the Terrorism (Prevention) Act, granted an order proscribing IPOB! So, whatever European Union or the United States of America or any foreign country says about IPOB is immaterial, irrelevant and of no moment!”
With particular reference to the EU and the US, Obono-Obla said meddling in Nigeria’s internal affair could erode the nation’s sovereignty.