Home » news » THE UNTOLD: How Sen Dino Fled From Plenary Through Backdoor To Evade Recall Notice From INEC

THE UNTOLD: How Sen Dino Fled From Plenary Through Backdoor To Evade Recall Notice From INEC 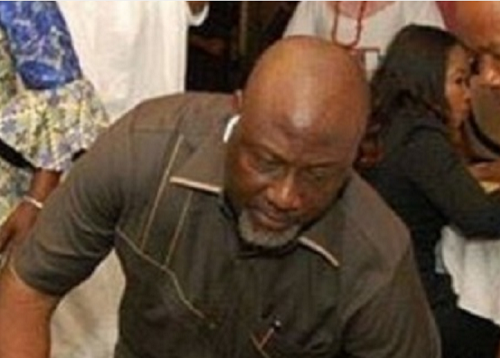 Senator Dino Melaye representing Kogi State yesterday fled From the plenary session just to ensure he evaded being served the recall notice brought by the officials of the Independent National Electoral Commission, INEC.
Officials of the Independent National Electoral Commission were at the National Assembly Complex, Abuja, on Tuesday, to serve the embattled lawmaker representing Kogi West Senatorial District, Senator Dino Melaye, the petition by his constituents to recall him.
The officials, however, met Melaye’s office (Room 2.13, New Building, Senate Wing) locked.

News Punch yesterday reported that INEC Officials were at the office of the embattled Senator at the National Assembly complex.
Four bags believed to be containing the recall documents and court papers were sighted at the door to the office.
While some of the INEC officials waited at Melaye’s door, others took positions at various entrances between the office and the Senate chamber.
While the officials waited, Melaye was in the chamber for the day’s plenary.
According to Punch Newspaper, Senator Dino Melaye, however, hurriedly left the chamber at about 1.45pm, while the session was ongoing, rushed into a waiting car at the main entrance of the complex – the closest to the chamber – and drove off.
Some of the officials around the chamber failed in their bid to meet up with Melaye.

In a WhatsApp message to our correspondent later, Melaye said, “Appeal properly entered and all records of proceedings at the lower court transferred to the Court of Appeal. Nail on INEC.”
The senator accompanied the message with a photograph of his notice of appeal filed on September 15, 2017, at the Court of Appeal to set aside the judgment of the Federal High Court delivered on September 11, 2017.
Melaye had, at a press conference in Abuja on Monday, said the 90-day deadline set for INEC by Section 69b of the 1999 Constitution (as amended) had expired.
He said, “The 90-day period, as provided for in the constitution for conducting the referendum (after our verification), elapsed by effluxion of time on the 23rd day of September 2017.
“The time, as provided for in the Constitution of the Federal Republic of Nigeria, having elapsed by effluxion of time, I, Senator Dino Melaye, cannot and shall not under any circumstance, aid and abet INEC to further desecrate and infringe on the provisions of the Constitution of the Federal Republic of Nigeria, which I have sworn to defend.”