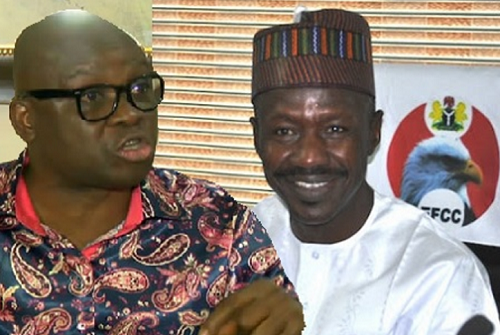 The economic and Financial Crime Commission has said it arrested the duo of Ekiti State Finance Commissioner, Chief Toyin Ojo, and the Accountant General, Mrs. Yemisi Owolabi, over their alleged roles in the diversion of N7bn
The Ekiti States officials were yesterday arrested while the Governor, Ayodele Fayose was officially declaring hi 2019 Presidential ambition.
The money was alleged to have been part of the bailout which was paid to the Ekiti State Government by the Federal Government.
The state was said to have received over N11bn from the Federal Government.
According to the spokesman for the EFCC, Mr. Wilson Uwujaren, both Toyin Ojo and Yemisi Owolabi had ignored a series of invitations, leaving the commission with no choice but to arrest them, Punch Newspaper reports this morning
Uwujaren  according to Punch Newspaper stated, “The accountant general and the commissioner were invited on several occasions but they refused to honour invitations and they were picked up and the investigation has to do with the misuse of bailout funds.”
The EFCC spokesman also dismissed claims that the Ekiti State Government had obtained a restraining order against the commission.
The Ekiti State Government had last year rejected plans by the Senate to probe how bailouts granted the state to settle salary arrears by the Federal Government were spent.
The Ekiti government had cited the sections of the constitution that said Nigeria’s federal system does not give the Senate the constitutional power to exercise oversight over finances of the states.
The state government’s stance was in reaction to a letter sent by the Senate Committee on State and Local Government Administration, led by Gumel Abubakar.

But Ekiti State, in a November 11, 2016 letter, signed by the Attorney General and Commissioner for Justice, Owoseni Ajayi, faulted the plan by the Senate to probe how the funds were spent.
But in its reaction on Thursday, the Ekiti State Government described the arrest of Ojo and Owolabi by the EFCC as an irresponsible action.
A statement by the Special Assistant to Fayose on Public Communications and New Media, Lere Olayinka, said it was obvious that “the hawks around President Muhammadu Buhari” were afraid of the governor’s declaration for the 2019 presidential election.
“The EFCC is obviously living up to its status as the attack dog of the All Progressives Congress government, but the Ekiti State Government, under Governor Ayodele Fayose, cannot be intimidated.”
Olayinka said the arrest was carried out with a view to embarking on another round of media trial against the governor and his government.
“It is funny that the EFCC, in the bid to carry out its usual hatchet job against Governor Fayose, failed to take into cognisance the subsisting court order, which forbids any official of the Ekiti State Government from being arrested by the EFCC. Up till today, the court order has not been appealed and it subsists.”
The government challenged the EFCC to tell Nigerians what had been done to the loads of petitions written against the immediate past APC government in the state.
Follow Us on Twitter!