Home » opinion » Show Your faces, A True Leader Does Not Hide While Followers Die On The Streets, Father Mbaka Lashes Out On Nnamdi Kanu and S/E Politicians.

Show Your faces, A True Leader Does Not Hide While Followers Die On The Streets, Father Mbaka Lashes Out On Nnamdi Kanu and S/E Politicians. 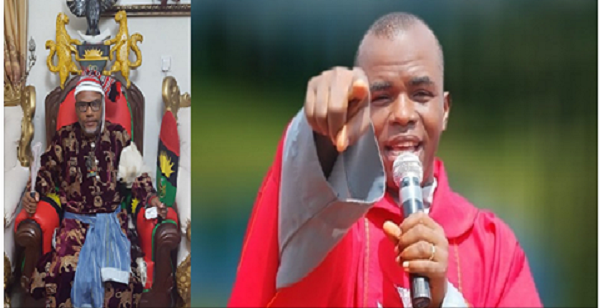 Rev. Fr. Ejike Mbaka of the Adoration Ministry, Enugu, has finally reacted to the crisis in the south-east caused by the Biafra agitation led by Nnamdi Kanu’s Indigenous People of Biafra (IPOB) group.
It was gathered that the cleric made his comments during a sermon at his parish in a 3-minute video which was shared on twitter by political commentator, Kayode Ogundamisi.
Speaking in the Igbo dialect, Mbaka stated that those screaming for Biafra, and influential Igbo leaders, should be the ones at the forefront of the agitation.
He lamented over the fact that the region’s leaders chose to hide, while young Igbos were sent to die on the streets. The charismatic priest also countered the notion that Igbos were hated.

He stated: “Nobody should deceive you saying that ‘Igbos are hated’. That’s how we (Igbos) believe nonsense. The poor masses are told to agitate for Biafra.

“There is nothing wrong in Biafra. But those that say they want Biafra now (or never) should come out let us see the crème of the Igbos; then we all will push for Biafra. “Let the crème de la crème among the Igbos be at the forefront while the poor masses that loiter the streets in the name of Biafra will support from behind.
“The right thing is for parents to protect their children from danger. “I am not against Biafra but let the Igbo political elites; the Ubas of Anambra, Peter Obi, Ekwueme, Ekweremadu, Nnamanis, Sullivan Chime, Anyim Pius Anyim, I (Mbaka) etc should be the ones pushing for Biafra not our children who get killed on the streets every day.
“Where are the Igbo political elites? They are in hiding in Abuja and overseas. “They have sent these children to push for Biafra and they have gone in hiding. That is not leadership.
“A leader should be in front to take bullets for his followers just as Christ willingly gave his life for his followers. “A leader is not one who will sit and sacrifice the poor for his ambition.”
See his video below; 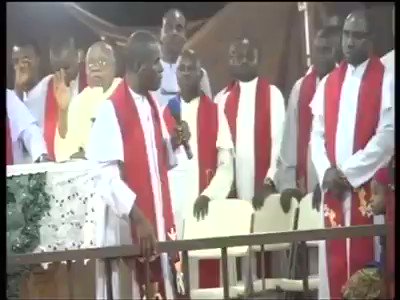