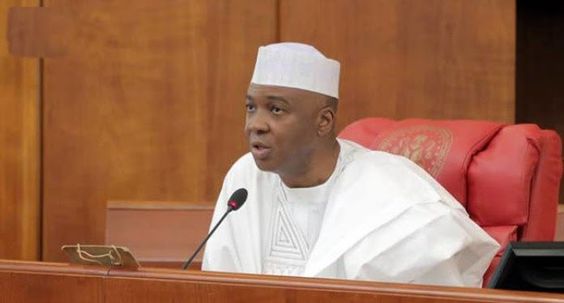 Emerging report indicates that Senate President, Bukola Saraki, had on Tuesday, survived yet another impeachment move being spearheaded by Northerner Senators.
The impeachment move came over Saraki’s declaration that the proscription of the Indigenous People of Biafra, IPOB, was illegal and unconstitutional.
Igberetvnews gathered from sources, that during the Tuesday’s closed-door meeting before the commencement of the Senate plenary, Senators from the North-East during the session, raised the issue.
Recall, that there were fears ahead of the Senate’s resumption, that the first day might be stormy, because some Senators had perfected plans to ask for clarification as to why Saraki responded the way he did, on the proscription of IPOB by the Federal Government.
A Senator, who spoke in confidence, said Saraki used the closed-door session and consolidated last week’s outreach, which he undertook to Senators from all the geopolitical zones ahead of Tuesday’s resumption.
“Of course, some Senators from the South-East were reluctant to align themselves with the position of the South-East Governors for political expediency; and when Saraki said IPOB’s proscription was unconstitutional, many believed he said it in solidarity with the South-East Senators, who form part of his support base.
“But that is not totally correct; there is the issue of national interest because, we too from the North have the interest of our Constituents at heart. Many of them thought the Senate is against President Buhari, and this is a wrong perception.

“Therefore, we all spoke during the closed-door meeting, and at the end of the day, it was agreed the issue should not be debated in plenary, because what needed to be done by various stakeholders have been done. The South-East Governors have spoken, Saraki had asked for due process to be followed , and the Federal Government did the needful. At the end of the day, the court had decided. We felt it was a win-win situation, and therefore, there was no need to go and strip ourselves naked in the market”, he said.
Efforts to speak to Senator Abaribe was unsuccessful, as he neither answered his calls, nor replied to the text message sent to him last night.
The three-point resolutions go thus: “The unity of Nigeria is not negotiable, and we are fully committed to the territorial integrity of the country.
“We will seek all possible avenues to make sure that peace reigns across the country.
“Advise all groups that are pursuing one agitation or the other, to do so through constitutional means.”
Follow Us on Twitter!