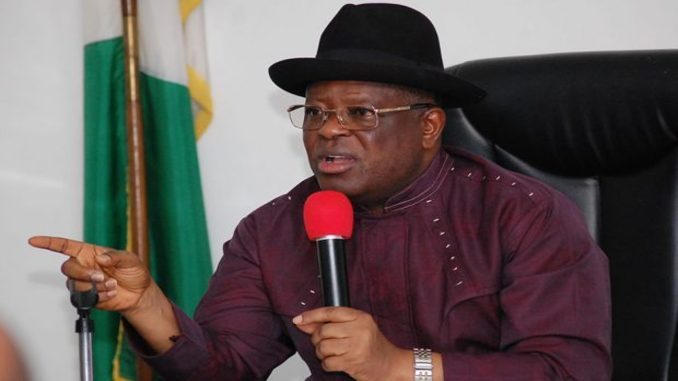 The Chairman of the South-East Governors Forum and Governor of Ebonyi State, David Umahi, has said that the forum has resolved to rehabilitate and reintegrate members of the outlawed Indigenous Peoples of Biafra.
The governors, he said, decided to proscribe the activities of the outlawed group to save the lives of 12 million Igbo living in different parts of the country.
Umahi made the declaration in Ezillo, Ishielu Local Government Area of Ebonyi State on Tuesday during the activities marking the ‘2017 Ebonyi Peace Day.’
He declared that the forum had no apology for proscribing IPOB, noting that the measure was adopted to restore peace and save the lives of the people.
“We have all agreed that some of our youths, who were misled in this direction, must be reabsorbed and reintegrated and be made to do something with their hands.
“I have asked the Ministry of Economic Empowerment and Job Creation to open a register for some of our youths in this agitation, who were misled and did not understand what was going on. By my words, we are going to rehabilitate and re-integrate them into meaningful venture,” he stated.

Umahi argued that the IPOB agitation was not about insulting Mr. President or other ethnic nationalities, stressing, however, that agitation should be by peaceful process and that “the issue of marginalisation and agitation should not degenerate into self-help.”
On why the state government set aside 5th September every year as ‘Ebonyi Peace Day Celebration,’ the governor said the initiative was to commemorate the restoration of peace among the hitherto warring communities of Ezza and their Ezza Ezillo neighbours.
“Today the will of God is enthroned in the land of Ezillo and Ezza Ezillo communities. I urge the two communities to be productive so that their needs would be addressed by the government,” he said.
He said the government had set three cardinal agenda in the rehabilitation of displaced communities, namely reconciliation, rebuilding and reconstruction towards the restoration of lasting peace to the state.
“Peace shall return to Ebonyi State, other areas within the state where there is crisis, before the end of the year; areas not resolved must be resolved, “he said.
The governor said that the government had concluded arrangements to forward three peace bills to the state House of Assembly for passage into law, stating that, “until the lawmakers passed it into law, it has not come to be, but technically speaking it has come to be.”
Follow Us on Twitter!