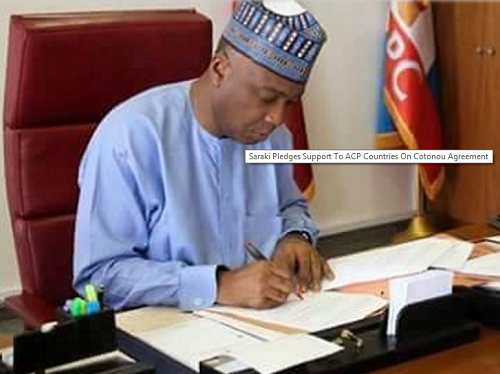 President of the Senate, Dr. Abubakar Bukola Saraki, has pledged the support of the National Assembly to the Cotonou Agreement of the African, Carribean and Pacific (ACP) countries ahead of its meeting in Cotonou, Benin Republic to fashion out a unified terms of agreement with the European Union (EU).
In a similar vein, the President of the Senate also assured the new Country Director of the United Nations Development Programme (UNDP) to Nigeria, Samuel Bawlya, of the quick passage of the gender bill before the National Assembly.
Saraki spoke when the Head of ACP delegation led by Ambassador Ahmadu Diop and the Country Director of the UNDP  visited him separately at the National Assembly in Abuja on Thursday.
According to a press statement by his Special Assistant on Print Media, Chuks Okocha, Saraki told the the ACP delegation that this is the time for Africa, the Caribbean and Pacific nations to speak with one voice on issues of mutual interests.
"Let me assure you of the support of the National Assembly," Saraki said. "With the confidence, we have in the team led by yourself and the importance that has been placed on the work you are doing, be rest assured of our support.
"What gives us the confidence is the capacity from those of you who have taken-up the responsibility of going into discussion and negotiation on how to renew the Cotonou Agreement".
The President of the Senate also told the ACP group that most  parts of the Cotonou Agreement affect Nigeria and other African countries, stating that for this reason, "it is very important that we appreciate your visit.
"We seek lots of collaboration to keep us informed. We are very keen to see how that type of negotiation across the continent will affect the future and the kind of development in different parts of the world.
"As you rightly said,  about what is happening around the world, like the issues of migration,  climate change,  terrorism, trade and development are crucial to us.  It is time to reset the button.
"As you can see in Africa,  we have larger per cent of youth,  70 percent of our population are under the age of 30 and even below. We must think of the future,  whatever agreement we have,  we must think of the future.
"Today,  we hear a lot of stories and some of them saying that  after 2020, there would be no more petroleum powered cars but those powered by  electricity.  What will happen to countries like ours that still depends on fossil fuel for cars? We need to start talking  about that now.
"These are important issues that we must begin to engage with other parts of the world and we hope that we will be able to get it done. We want to assure you of our support anytime.

"In the Senate  and the National Assembly here, our focus is to create an enabling environment for the young people that are beginning to agitate for a better continent.
"We cannot do that by ourselves; we cannot do that without having
enabling environment that the entire global world will assist and
support to bring it about," the Senate President stated.
Earlier, the leader of the ACP delegation, Ambassador Diop, said that
the team is on diplomatic consultation with members countries to renew
the Cotonou Agreement before signing another terms of agreement with
the EU countries.
Also, the new Country Director of the UNDP, Mr. Samuel Bawlya, during
a visit to the
Also, the President of the Senate while responding to the comments by
the new UNDP Country Director on the gender equality bill before the
National Assembly, noted that much work has been done on the gender
bill.
"The Gender Bill as you mentioned is before the National Assembly and
we are made much progress on it. We should be able to come up with
something tangible on it very soon.
"As I said,  I think the support that can be given at this point
should be in terms of advocacy on the objective of the Bill so that it
would it make more acceptable," he stated.
Earlier, the UNDP County Director commended the President of the
Senate for the  establishment of the Sustainable Development Goals
(SDG)/Steering Committee co-chaired by the Leaders of the Senate and
House of Representatives, to ensure effective oversight of the SDGs
implementation in the country.
He also expressed his gratitude to the National Assembly for its
excellent collaboration which has always existed between it and the
UNDP, stating that  he shares with the Senate President core UNDP
mandate areas in the country which include: Governance and Peace
Building, Sustainable Development, Inclusive Growth and Poverty
alleviation and SDGs.
Follow Us on Twitter!