Home » opinion » Saraki Is Not Antagonistic Towards Buhari

Saraki Is Not Antagonistic Towards Buhari 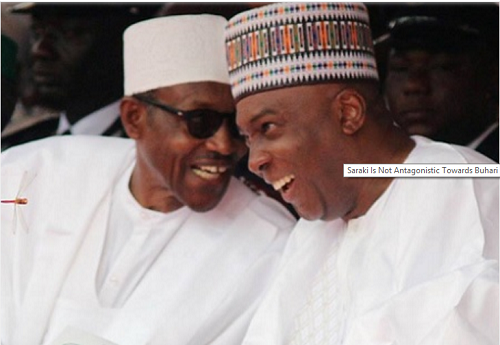 There have been apocryphal stories trending on online and social media that the Senate President, Dr. Abubakar Bukola Saraki is in a tussle with President Muhammadu Buhari. This information is not true and is used by mischief makers to gain easy attention and cast aspersion on Saraki. He has no problem with Buhari as he supports Buhari’s initiatives that best serve the overall interest of Nigerians.
Saraki espouse the belief of the rule of law just as Buhari does. He has supported Buhari’s positive ideals in ensuring that Nigeria is a better country.   He evinced his love for Nigerians by supporting many bills and activities that would be of potent impact on Nigerians.
It has been his fervent desire that Buhari’s government should succeed because if Buhari fails to deliver, it is Nigerians that will suffer from the ripple effect of poor leadership. He has on numerous occasions reemphasized that Buhari and all leaders should ensure that they do not make ephemeral impact on Nigerians but indulge in long-lasting and life-changing development in their respective places of leadership.
He has been on the same page with Buhari on working in solving Nigeria’s fundamental problems that have been having adverse effect on Nigerians. He has the alacrity to work with anyone who has the interest of Nigerians at heart and he has been working with Buhari to move Nigeria forward.
The LEADERSHIP published an article on September 21, 2017 faulting Saraki’s statement and activities with respect to the Indigenous People of Biafra (IPOB) being proscribed a terrorist organization and accusing him of leaving Kwara State in debts among other issues.
Saraki wanted due process to be followed in the declaration of IPOB a terrorist organization. He is a man that wants the situation not to degenerate and in doing so, he met with South East Senators on Tuesday September 19, 2017 and also met with Northern Senators on Thursday September 21, 2017. He discussed sensitive issues of Nigeria’s indivisibility which they all agreed to work not just with him and Buhari to ensure the peaceful co-existence of Nigeria but also all leaders who are driven by their patriotism for Nigeria to ensure that it unity remains indivisible. Why would someone accuse Saraki of working against Buhari and the unity of Nigeria?
On the issue of Saraki leaving Kwara State in debts, did LEADERSHIP bother to reflect the infrastructural development and the impact such loans made on the people of Kwara State while he was the governor?  Besides, is there any state in Nigeria that in not indebted?  In fact, most states even have outrageous debts that do not reflect the achievements or impact claimed to have been made, but this is not the same case with Saraki.
When some group of people are hell-bent on pulling someone down, they will be blindfolded by hate, sentiments and selfishness, and will not acknowledge the achievement and impact the person has made but would rather dwell and magnify the person’s shortcoming which every leader has in one form or the other.
Saraki as a leader has his own shortcomings which every leader does including Buhari. Saraki hate writers have never reflected any good he has done. Do they mean that there is nothing right Saraki has ever done? When one reads such articles and stories you will just read what was or is on the minds of such hate writers ever before putting the articles or stories in place.
I have written series of articles in support of Buhari and he received approbation from most Nigerians for the good work he has done so far. On the contrary, many people cast aspersion on me for saying that Buhari is the best president Nigeria has ever produced. I support Buhari’s Ideals of making Nigeria a better country. But despite all these, Buhari also has his numerous shortcomings which pro-Buhari and anti-Saraki writers fail to acknowledge.
There are many “bad eggs” in Buhari’s cabinet and government which he is very much aware but has given a blind eye to issues of corruption and falsehood concerning them.  So many activities in his government have put to test his mouthed mantra of zero tolerance for corruption.

Senator Isha Hamman Misau, representing Bauchi Central Senatorial District, in a story published by THE EAGLE ONLINE on August 25, 2017, accused the Inspector General of Police (IGP), Ibrahim Idris Kpotum of cornering N10 billion monthly and taking bribe to post Commissioners of Police to juicy State such as Rivers, Akwa Ibom, Bayelsa, Delta States among others. There were calls from Nigerians, NGOs and the media for IGP Idris to be probed and the Police Service Commission reformed. But Buhari gave “a blind eye and a deaf ear” to the calls.
The Minister of Information and Culture, Lai Mohammed has been one of the most contradictable Information Minister Nigeria has produced. He will say one thing today and tomorrow deny he said it. He manages Buhari’s image in an abysmal way. Recently he said that the Federal Government asked the United Kingdom (UK) to shut down Radio Biafra, but UK insists that Nigerian Government did not ask them to shut down Radio Biafra and they are not aware of any representation from Nigerian Government about Radio Biafra. Has he not done enough damage to be replaced?
One of the areas where Buhari has given “a blind eye and a deaf ear” is the issue of Fulani herdsmen attacks. The Fulani herdsmen have been committing series of acts of impunity by unjustifiably killing farmers/villagers. Buhari has never made any public statement neither by himself nor through his Special Adviser on Media and Publicity against such attacks. Such attacks have never been vehemently condemned nor have he seriously ordered a crackdown on them by ordering security agencies to carry out “fierce crackdown”. As a result of Buhari’s reluctance and negligence on the matter, many are of the opinion that since he is Fulani and also own cows, he is sympathetic to them and will not be fervently moved to fight his own people who are herdsmen. This is also corruption in another form outside financial corruption.
The LEADERSHIP says further that Saraki emerged Senate President in the most dubious way. Shortly after Saraki emerged Senate President, Bola Tinubu, Senator George Akume, Senator Ahmed Lawan among others approached Buhari and told him that they will take legal action against Saraki. Buhari in his response told them that constitutional process was followed in the election of Saraki as the Senate President and nothing anyone or the court, not even the Supreme Court can do.
If Saraki’s emergence as the Senate President followed constitutional process, what then makes his emergence dubious or illegal? Was his emergence as the Senate President unconstitutional? If his emergence was truly unconstitutional whey was he not taken to court?
People should stop having ambivalent feelings towards Saraki. Saraki has nothing in mind against Buhari. The reserve is actually the case. Saraki’s only crime to Buhari and Tinubu is his emergence as the Senate President against their preferred candidate Senator Ahmed Lawan. There are many other politicians who are worse than Saraki but nobody talks about them because they are dancing to the tones of the political elite. That is how politics plays out in Nigeria. If Saraki had not emerged the Senate President, hate writers and those fighting him would have used their “prowess”, “wherewithal” and “energy” to attack others standing on their way and Saraki would have been “free like a bird”.
Saraki urges Nigerians to desist from making callous comments against others and indulging in calumny against them as these uncivil acts increase political and social tensions and retard development.
He admonished Nigerians to continue to pray for Buhari and all Nigerian leaders so that they will reignite their pledge to making Nigeria a better and safer country where tranquillity will prevail over violence and disorder.
Follow Us on Twitter!