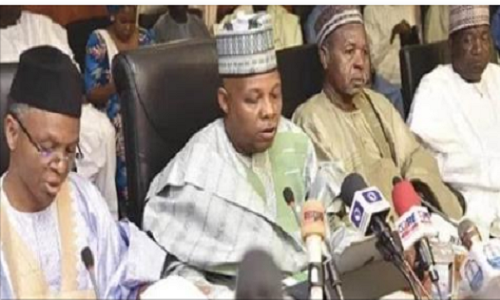 As The wind of restructuring debate continued to sweep across the country, northern states of Kano, Kastina, Jigawa, Nasarawa and Benue, yesterday, gave condition upon which they would support it: retention of a strong Federal Government.
At the North West Zonal Public Hearing on True Federalism held at the Coronation Hall, Kano State Government House, Kano State Governor, Dr. Abdullahi Umar Ganduje expressed support for “a strong Federal Government  founded on a clear responsibility and sufficient resources to guarantee the development of the federating units.”
While restating support for the indivisibility of the country, he cast his vote for a strong Federal Government that would be strengthened to define and set uniform minimum national standards in all facets of national life with the objective of ensuring even spread of social amenities and balanced economy.
His Katsina State counterpart, Governor Aminu Masari equally backed a strong central government. While calling for an arrangement that would recognise the peculiar needs of the different federating units, he said the powers of the central government must not be weakened in the process of the devolution.
He argued that recent agitations, rebellion and insurgency in some parts of the country had all made a case for a strong central government that could deal with such situations, but objected to the creation of additional states.
In its contribution, Jigawa State government also rejected the push for the creation of additional states, saying it made no sense when most of the existing states were not viable.
Secretary to the State Government, Alhaji Adamu Abdulkadiri Fanini, who represented the governor, canvassed the idea of independent candidacy in the political process and state police, saying  it was well known that most state governments were providing huge support to the police in the area of  equipment and logistics.
Jigawa also made a strong case for the devolution of the functions of the Federal Government in the area of agriculture, education, road construction and health while asking for increased allocation to states and local governments.
Kaduna State was not represented at the public hearing chaired by the former governor of Enugu State, Sullivan Chime and some other top party members of the APC.
In a related development, Nasarawa State Governor, Tanko Al-makura kicked against restructuring that would disintegrate the country.
Speaking during the public consultation of the APC Committee on true federalism, in Plateau, Benue and Nasarawa State, held at the Hill Station Hotel, Jos, he said: “We will not support those who want restructuring that will balkanise this country, we will kick against those people and they need to think very well. I believe we have come too far to start changing the system. It will be disastrous and unproductive.  I don’t share the same opinion with those advocating for disintegration. Those people are using the word restructuring loosely and I don’t want to fall into that trap.
“I want to look at restructuring or true federalism as a way of looking into how our constitution works and making it more effective.”
Director of Research, Planning and Documentation, Government House, Jos, Prof. John Wade said there was no going back on restructuring in Nigeria if the country must remain peaceful and united.
But he said restructuring must be done within the confine of the law to douse tension occasioned by current agitations for self-determination by various sections of the country.
On his part, legal adviser of APC in Benue State, Omale Omale, threw his weight behind land tenure administration, devolution of power and local government autonomy.
While not opposed to restructuring, Niger State governor,  Abubakar Sani Bello and presidential spokesman, Mr. Femi Adesina said the agitations should be geared towards maximising the potential of the various ethnic nationalities rather than how to dismember it.

Both men who spoke at the fifth  anniversary lecture of News Express in Lagos urged Nigerians to respect each others rights and have abiding faith in Nigeria in their agitation, because the hallmarks of democracy was the right of people to hold dissenting views.
Governor Bello who was represented by his Chief Press Secretary, Mallam Jubril Ndache,  said there were red lines that must not be crossed in the demand for restructuring.
“As we discuss restructuring,  we must be aware of the red lines that must not be crossed. The red lines are not because we are afraid but because there are certain basics that must not be toyed with.  Our national unity must not be toyed with., breaking Nigeria into smaller units will diminish our relevance, .
“Restructuring must be done with decorum and the realisation that the hallmarks of democracy is the right to hold dissenting views. Niger State is today run on the basis of restructured governance.  There is an unwritten zoning arrangement that rotates the governorship among the three zones of the state,” he said.
In his contribution, Adesina noted that Nigerians have no uniform definition of what they meant by restructuring, which he said was why the APC-led Federal Government set up a committee on restructuring to go round the country and collate the views of the citizenry.
He regretted that some people have turned the issue of restructuring to another tool of opposition.
“There is nothing wrong with restructuring that will deepen the unity and strengthen the country. But if the restructuring is to dismember or weaken the country or when it becomes an instrument of saber-rattling, it is bad,” he stated.
Adesina also condemned the circulation of “fake” news that the APC government was against the restructuring of the country, noting that the APC government was committed to its manifesto to strengthen the security of the country and revive the economy.
Source: Daily Sun
Follow Us on Twitter!