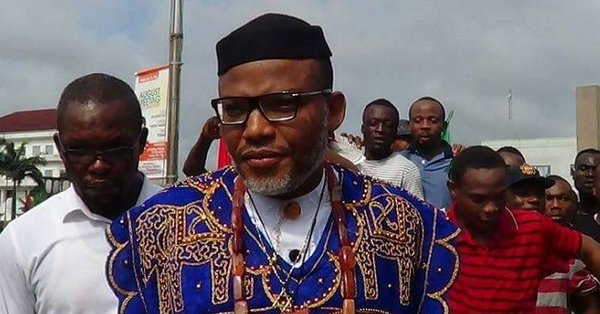 • Release the body of Kanu dead or alive-Abia Traditional Rulers
* Kanu’s cook was killed hy soldiers
* We reject Python Dance in South East.
* Why didn’t FG declare it on Fulani herdsmen?
Ibeku traditional rulers in Umuahia North Council Area of Abia State have called on the Nigerian Army to release, dead or alive, their colleague and father of leader of Indigenous People of Biafra, IPOB, Eze Israel Kanu, saying that since the invasion and attack on his palace by soldiers, they don’t know his whereabouts.

Speaking, yesterday, in Umuahia, under the umbrella body of Ibeku Traditional Rulers Council, chairman of the council, Eze Henry Ezekwem, flanked by other monarchs, disowned a group, Umuahia Youth Association, which gave Governor Okezie Ikpeazu ultimatum to dethrone Eze Kanu, saying the association does not exist in Umuahia.
According to them, Nnmadi Kanu is a full-fledged adult and his father cannot be held accountable for his actions. He said: “Ibeku traditional rulers disown the group, it does not exist; we also reject the call to dethrone Eze Israel Kanu.

He has not committed any offence. Nnamdi Kanu is an adult, he has his freedom to exercise; his father cannot stop him. “We call on Governor Okezie Ikpeazu to ignore such call. We don’t even know about the said association, it does not exist in Umuahia. In fact, we commend the governor for rejecting the call and saying openly that he would not dethrone Eze Kanu.
“The army should let us know the where abouts of Eze Israel Kanu. We need him alive or dead. “We totally condemn the attack on Eze Israel Kanu’s palace by soldiers. His cook, a woman, was killed during the attack. The Nigerian Army should tell us the sins of Eze Kanu. “We call on the Federal Government to produce those who carried out the attack and also come to the rescue of Eze Kanu and his family over the collateral damage done in his palace and desacretion of the throne.” Operation Python Dance II On Operation Python Dance II, the monarchs rejected it and wondered why it was not launched since Fulani herdsmen have been attacking and destroying lives and property in the South-East.
Follow Us on Twitter!