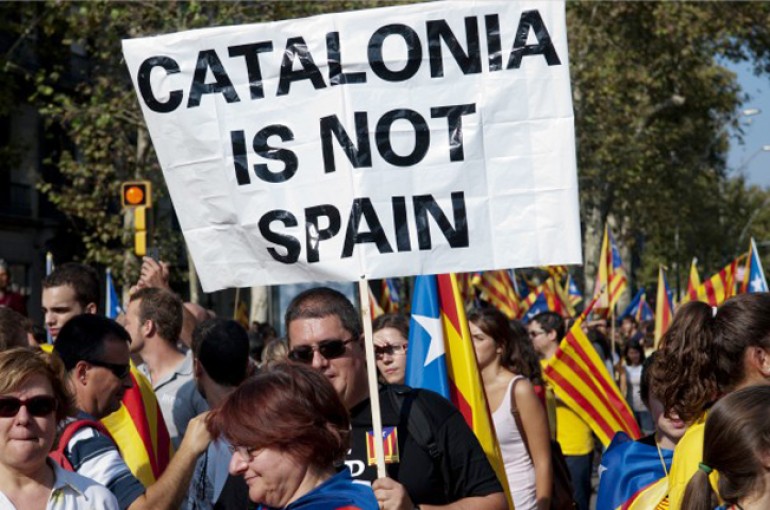 Spain has moved to crush a plan by secessionist Catalonia to hold a referendum to legalize its independence by arresting officials and seizing referendum materials.
The region’s leader accused Madrid on Wednesday of imposing a “de facto state of emergency”,  with the series of measures taken to prevent the independence referendum taking place.
In a speech following the latest move by Madrid — the detention of 13 regional government officials — Carles Puigdemont also claimed the Spanish state had implemented a “de facto suspension of Catalonia’s self-governance” by for instance tightening control over Catalan finances.
Spanish Prime Minister Mariano Rajoy earlier called for calm as protests erupted in Barcelona over the detentions, the reasons of which were not immediately clear though authorities have warned that officials who help stage the referendum could face criminal charges.
The premier called for “a return to normality and a return to common sense because the referendum cannot take place.”
Rajoy also accused Catalonia’s separatist leaders of breaking the law and acting against the Spanish constitution.

Tensions have spiked in Catalonia as regional leaders press ahead with preparations for the October 1 referendum, despite Madrid’s ban and a court ruling deeming it unconstitutional.
Madrid has taken several other steps to prevent the Catalan referendum from going forward, including threatening to arrest mayors who facilitate the vote.
Authorities have also seized items planned for the plebiscite including over 45,000 notifications which were about to be sent to Catalans selected to staff polling stations.
In his speech, Puigdemont accused Madrid of “suspending and repressing” freedoms. (NAN)
Follow Us on Twitter!