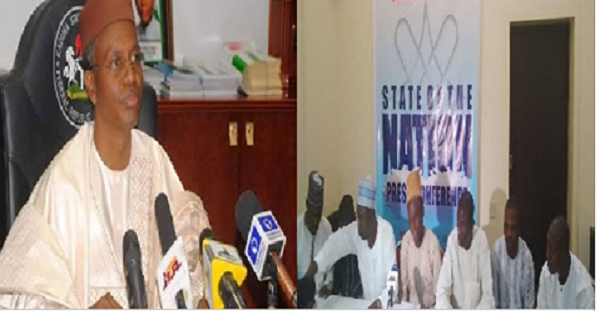 The Kaduna State Government on Thursday said it had obtained a bench warrant from the court to arrest members of the Coalition of Northern Youths who  gave October 1, 2017 as deadline for Ndigbo in the North to quit or be forced out of the region.
This was despite the withdrawal of the quit notice by the group.
A coalition of northern groups, including the Arewa Youth Consultative Forum led Shettima Yerima, had in July  gaven all the Igbo resident in the 19 states of the North a three-month ultimatum to quit  or be forced out after the expiration of the October 1, 2017 deadline.
They also asked  all northerners resident in the South-East to get prepared and return to the North.
The Kaduna State Governor, Nasir el-Rufai had earlier ordered the arrest of the principal actors who signed the ‘Kaduna declaration.’
The declaration  was signed by Nastura Ashir Sharif (Arewa Citizens Action for Change); Ambassador ShettimaYerima (Arewa  Youth Consultative Forum); Aminu Adam (Arewa Youth  Development Foundation); Alfred Solomon (Arewa Students Forum); and Abdul-Azeez Suleiman (Northern Emancipation  Network) as well as JoshuaViashman (Northern Youth Vanguard).

However, on Thursday, the state government obtained a bench warrant from the court to arrest those that issued the quit notice ultimatum.
Addressing a press conference at the Sir Kashim Ibrahim Government House, Kaduna, the state capital, el-Rufai’s Senior Special Assistant on Media and Publicity, Mr. Samuel Aruwan, however, assured residents  including the Igbo, that they had nothing to fear.

He said the assurance was given by the Kaduna State Government which commended all residents and communities in the state for their contributions to peace and harmony.
The government, he added, informed residents that law enforcement and security agencies were taking necessary actions to prevent any threat to peace.
Aruwan said the state government was steadfast about enforcing the law and in keeping the peace, disclosing that the government had taken further actions in relation to those persons that were threatening the liberty of other citizens.
“The government has obtained a bench warrant for their arrest, after filing a formal criminal complaint,” he said.
Aruwan added, “The Kaduna State Government notes, with commendation, the efforts of the residents of our diverse state to uphold peace in their communities. The government and the security agencies are working to prevent any threat to this cherished harmony. Vigorous security patrols will continue as part of concrete actions to reassure residents and demonstrate that bad behaviour is unwelcome and will not be tolerated.
“When some elements barged into our state capital to deliver an illegal ultimatum to a section of our community, the government condemned it and ordered the arrest of those concerned. The Kaduna State Government followed up with a formal criminal complaint to the police, and has obtained a bench warrant against them. Therefore, anybody that sights them or is aware of their location should proudly discharge the civic duty of informing the police.
“The criminal complaint specifies the sections of the recently updated Penal Code Law of Kaduna State, 2017 that were violated by those that issued the illegal ultimatum. These include inciting disturbance:​​Section 78; disturbing public peace: ​​Section 77; injurious falsehood: ​​Section 373; unlawful assembly: ​​Section 66; and criminal conspiracy: ​​Section 59.
“The formal criminal complaint and the bench warrant secured on the 8th August, 2017 provide a basis to investigate, apprehend and ultimately prosecute the suspects.”