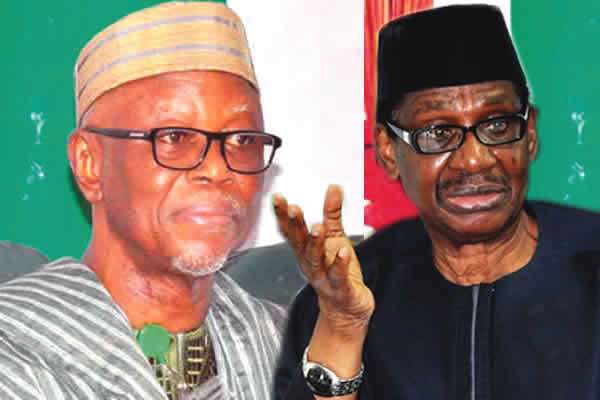 The war of words between the National Chairman of the All Progressives Congress, (APC), Chief John Odigie-Oyegun, and Chairman of the Presidential Advisory Committee on Anti-corruption (PACAC), Professor Itse Sagay (SAN), has continued unabated with both men resorting to derogatory words.
Sagay who reacted to his being labelled by the APC’s leadership as a “quintessential rogue elephant,” described Oyegun as a “come and chop’’ politician.
The APC National Publicity Secretary, Mallam Bolaji Abdullahi, had in a statement last Monday labelled Sagay as “Rogue Elephant,” adding that in his sheer arrogance, the PACAC chairman forgot that it was impossible for him to call out the leadership of the party as “weak” and “unprincipled” without indicting the president, who is the leader of the party.

The party also denied that it’s leadership is not comprised of most unprincipled group of people” who are “encouraging and accepting rogues” in the party as alleged by the presidential aide.
But in his reaction yesterday, the constitutional lawyer said: “I am an accomplished man long before any appointment. I am not a “come and chop” politician like you lot.
“My loyalty is to the president and not to the party which has continued to fail under the leadership of Chief John Odigie-Oyegun.
“To start with, I am not a ‘come and chop’ person as you are. I did not come to ‘chop’; so the party is not doing me a favour. You are the ones that have come to ‘chop.’


“Secondly, my criticism of APC is not against President Muhammadu Buhari who I think is a man of great honour, integrity and whom I admire and who inspires me.
“I took this job because of Buhari and Osinbajo, who I admire greatly. The people I am referring to in my criticism are John Odigie-Oyegun and one Bolaji Abdullahi, who is (Senate President Bukola) Saraki’s Man Friday. They are dining with the devil who wants to destroy the party.
“They are appeasers, who are acting the way (former) British Prime Minister, Neville Chamberlain, appeased Adolf Hitler and in the process, they will destroy the party because they are weak and unable to confront evil and they will end up helping that Hitler to destroy the party.
“What is APC without Buhari, Osinbajo and Tinubu? The Oyegun-led executive, which is doing a policy of appeasement, will destroy the party.”
Follow Us on Twitter!