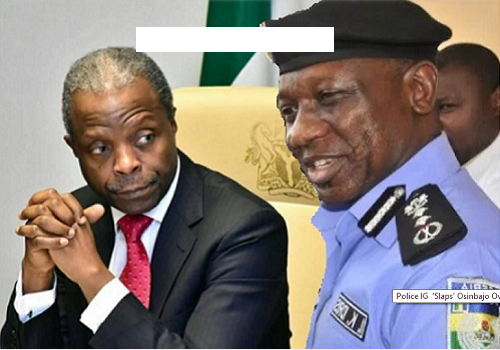 In an action that could be proverbially described as a "Slap on the face" of the Vice President, Prof, Yemi Osinbajo, the police authorities have snubbed a request made by him for the secondment of a police officer for a special assignment.
According to The Nation, the Police Inspector General, Ibrahim Idris, declined the release of Deputy Commissioner (DSP) Abduyari Lafia to serve on the Special Presidential Panel for the Recovery of Public Property as requested by a Presidency letter dated September 21, 2017.
Instead, the police boss posted 12 officers from the rank of Assistant Superintendent of Police and below to the panel.
Lafia had earned the confidence of the panel for uncovering how a syndicate defrauded a businessman, Mr. Austine Ugochukwu Albert, of $1 million.
His recommendation for promotion to the rank of Commissioner of Police was withdrawn at the last minute, following his rebuff of alleged pressure from some bigwigs to stay action on the $1 million.
Although Lafia was said to have been promised a bribe of $100,000, he insisted on bringing members of the syndicate to justice.
Following his unyielding position, some police officers were alleged to have conspired to transfer him from the Force Criminal Investigation Department (FCID) in Abuja to the Police Academy (POLAC) in Kano.

Before his posting to Kano, he was said to have recovered more than $205,000.
Based on his track records, the Special Investigation Panel requested for Lafia’s service on the directive of Vice President Osinbajo.
The Chairman of the SIP, Mr. Okoi Obono-Obla, who signed the letter, said: “I am directed by His Excellency, Vice President Yemi Osinbajo, SAN (GCON) to request for the release of DCP Abduyari S. Lafia to serve in the Special Presidential Panel for the Recovery of Public Property.
“DCP Abduyari S. Lafia is presently posted to POLAC with AP NO-41804.
“While thanking you for your usual cooperation, please be assured of my high regards and esteem.”
However, sources told The Nation that DCP Lafia was not released to the SIP owing to internal wrangling in the police.
A highly placed source familiar with the matter said: “The panel was shocked that those it did not request for were sent by the IGP.
“All attempts to get Lafia redeployed for the special assignment have been rebuffed.
“What shocked most people is that the affected DCP was requested for by the panel based on the instructions of the Vice President.
“We learnt that the redeployment of the crack detective was caught in hi-wire intrigues in the Force Headquarters over the $1 million case.
“The IGP was actually not disposed to the release of the DCP. But the panel believes only the DCP could fit into the assignment given to it. No agreement yet on this officer who is rated as incorruptible.”
Responding to a question, the source said: “The panel may have no choice than to report the latest dimension to the request to the VP.”
A police source said: “Well, although the IGP has the final say on redeployment of officers and other ranks, DCP Lafia ran into trouble with some police top shots for probing a syndicate who defrauded a businessman of $1m.
“Some officers had mounted pressure on DCP Lafia to drop the investigation of the $1m. At a point, the recommendation for his promotion to a CP was withdrawn from the Police Service Commission. The same recommendation was endorsed by the IGP.
“I think DCP Lafia stepped on toes over the fraud case. The IGP might not even be in the full picture of what is really happening.”
Businessman Austine Ugochukwu Albert, had petitioned President Muhammadu Buhari over alleged poor handling of a $1 million (N360million) fraud case he lodged with the police.
He said he paid N360 million in exchange for $1 million which he never got.

He suspected compromise, abuse of office and corrupt activities by some officers assigned to investigate how he was swindled of the money.
He blamed some officers in the Inspector-General of Police monitoring unit of compromise.
He alleged that he suspected a corrupt deal of about $200,000 to frustrate his complaint to the police.
He said the officer handling his case was transferred in a suspicious manner at the prompting of one of the influential suspects who defrauded him.
He said he could not understand why the officer was redeployed midway into a crucial investigation in which he had recovered $205,000.
In a petition through his counsel, Ugochukwu Ezekiel, he urged President Muhammadu Buhari to direct the IG to return his case to the Force Intelligence Bureau instead of the Monitoring Unit.
He said he paid N360 million with intent to source for $1 million for his business.
But after successfully remitting the N360 million, a group of five suspects involved in the transaction refused to give him the $1 million.
He said: “Surprisingly, after our client paid the money as agreed above, the group, which we now believe is led by one Bakare, disappeared with the money.
“Our client first reported the matter at Area J command of the Nigeria Police Force, Ajah, Lagos State where the suspects made confessional statements that the entire transaction was a fraud, but at this point they all refused to give up their kingpin, Bakare.
“The matter was later transferred to Zone 2 command of the Nigeria Police Force, Lagos on the orders of the Assistant Inspector General of Police who equally ordered that all accounts already frozen by the police pursuant to their investigation activities be unfrozen. Our client was dissatisfied and wrote a petition to the Inspector General of Police.
“Unfortunately, the officers that investigated the matter at Inspector General of Police monitoring unit compromised the matter, refused to arrest the kingpin who had been identified as Bakare.
“They hurriedly charged the matter to a Magistrate Court in Abuja, which to their knowledge, has no jurisdiction to entertain the matter.
“The suspects were subsequently set free on ridiculous bail conditions and this emboldened them as they called our client and demanded that our client should not pursue the matter anymore or he would be eliminated.
“To forestall the materialization of their threat, our client wrote a fresh petition to the Deputy Inspector General of Police, Force Criminal Investigation and Intelligence Department and the matter was assigned to the Force Intelligence Bureau for investigation.
“On learning of the embarrassing situation, the Deputy Commissioner of Police, Inspector General of Police monitoring unit quickly transferred the case file to the Force Intelligence Bureau for a review and unbiased investigation.
“Our client must confess that the Force Intelligence Bureau acted professionally and intelligently and within weeks rounded up the suspects and obtained an order from the Federal High Court to have them detained pending investigation.
“We are aware that the head of Force Intelligence Bureau was offered some huge amount of money as bribe and he turned it down.
“This honest officer was duly commended and recommended by the Inspector General of Police for his honesty and recommended that he be promoted to the office of Commissioner of Police.
“To our client’s utter consternation, our client got information that Bakare was boasting while still in detention that he has offered the money that was rejected by men of Force Intelligence Bureau to some officers in the Monitoring Unit and that the case will not only be taken away from that department but the head of that unit, who he described as very strict, will be removed.
“Our client treated this as the joke of the century and moved on. However, less than 24 hours after our client got the information, the Inspector General of Police sent a signal that the case file be transferred to another unit and that the officer be immediately transferred.”
Efforts made to reach police spokesman, Moshood Jimoh, yesterday night yielded no result.
Although he had called to speak with one of our reporters less than two hours earlier, his line was not going through at about 9 pm.