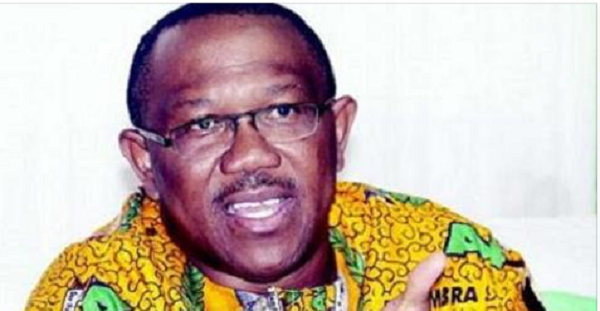 Peter obi has Questions to answer as regards to Flood crisis in Nibo, not Gov Willie Obiano, says former PG Nibo. According to all allegation leveled against Gov Obiano’s  jurisdiction on Thursday, by the PDP flag bearer for the forthcoming Anambra state governorship election, (Oseloka H. Obaze), over the poor condition of Nibo-Isiagu major road. Obaze also quoted that the Nibo road is an evidence of government not working in the state,this has been trampled by the former president general of the community (Hon Okey Goodluck Nwankwo).

According to the Former Pg Nibo ,The Ex-governor Peter Obi should be held responsible for his poor layout on the road during his administration, he further said “Oseloka H. Obaze was a pathological liar for linking Obiano as the cause of the failure”.The Secretary to Governor Obiano’s campaign flag off committee equally said that Oseloka H. Obaze is intending to use blackmail to disengage Gov Obiano from office. Previously, Oseloka H. Obaze said “This problem was created by the current State government who issued license for a market at Nibo-Isiagu road, subsequently blocking the drainage channel.” However, report has it that Oseloka H. Obaze turn back with his convoy for an alternative route due to heavy flood that damaged the  Nibo-Isiagu major road.

According to Hon Okey Goodluck Nwankwo who stated unconditionally that similar roads done by Mr Peter Obi’s administration in the State are damaging because of poor quality material and road maintenance . He further said certainly without with holding words that Nibo ring road was done by Mr Peter Obi’s administration and that the road has failed up to 75percent, He equally said that Mr Peter Obiand his godson Oseloka H. Obaze  should bury their heads in shame for executing substandard projects that cannot withstand the test of time in Anambra State.
“Peter Obi is to be blamed for his poor design and not Governor Willie Obiano pertaining to the flood that is causing havoc in the community, instead Governor Willie Obiano  should be praised for his good works in Nibo community”. says Hon Okey Goodluck Nwankwo. I Applaud the hard work of Governor Willie Obiano and his contributions in cleaning all the mess Mr Peter Obi’s did in Anambra State.
He also said that Governor Willie Obiano approved a 20million naira community project in Nibo, and that the project was not responsible for the flooding of Nibo community. Hon Goodluck, further assured opposition leaders in Anambra State that their hope of using blackmail to disengage Governor Obiano would definitely be rendered null and void because the people of the State knows the truth and cannot be deceived with cooked up  lies.