Home » politics » PDP Fires Back At Fayose – Stop Wasting Your Time And Resources On 2019 Presidency; You Can’t Run Under Our Party, See Why

PDP Fires Back At Fayose – Stop Wasting Your Time And Resources On 2019 Presidency; You Can’t Run Under Our Party, See Why 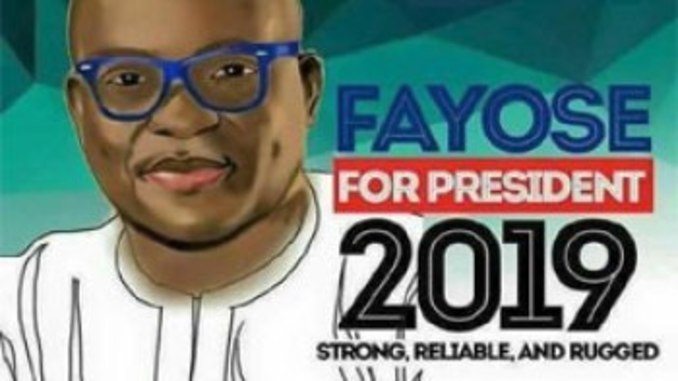 The Peoples Democratic Party has told Governor Ayo Fayose of Ekiti State not to waste his resources on his presidential ambition, saying the party’s candidate for the 2019 election will come from the North.
The party said all its members were aware of the zoning formula it adopted for both its presidential ticket and the position of the national chairman. Fayose had sent letters to some leaders of the party to inform them about his decision to run for the Presidency on the platform of the PDP.
The event, according to a copy of the letter sent to our correspondent, will hold in Abuja on Thursday.
The letter was signed by the governor under the banner of Ayo Fayose Presidential Campaign Organisation.
It read in part, “My dear leader, it is with deep sense of responsibility that I write to inform you of my intention to seek the ticket/mandate of our party to contest the 2019 presidential election, considering your support and commitment towards our great party, the Peoples Democratic Party, it becomes imperative to keep you informed and seek your support.
“This ambition is however without prejudice to our party’s position, but in the overall interest of the party and our country.
“I urge that all hands should be on deck to ensure victory in our quest to return to the Presidential Villa, Abuja in 2019.”
Expressing surprise at the action of the governor, the National Publicity Secretary of the party, Prince Dayo Adeyeye, called on Fayose to respect the decisions taken by the party on zoning. He wondered why Fayose would want to disobey the party despite his position as a leader, who he said, was also present at the national convention where the decisions were taken.

Adeyeye, who spoke exclusively to Punchng correspondent on the issue said, “The highest organ of the party, which is the national convention, zoned the presidential ticket of the PDP to the North. That has not changed. The same national convention zoned the position of the national chairman to the South. The convention has yet to change any of these two.
“That (national convention) is the supreme organ of the party. Those decisions are binding on all members of the party. Nobody can alter these decisions.”
“The governor is a member of the party and was at the convention where these decisions were taken. As a leader of the party, one expected the governor to respect the party and its decisions. If someone in such an office is breaking the decisions of the party, what do you expect from the rank and file. “
Our correspondent gathered that Fayose had once visited the Chairman of the Board of Trustees of the PDP, Walid Jibrin, at his residence in Abuja, where he solicited his support for his ambition.
A source close to Jibrin, however, said the governor was reminded of the party’s zoning formula, to which Fayose was said to have responded that he was constitutionally qualified to run.
Sources at the party national headquarters told our correspondent that Fayose could be working to deny the South-West the opportunity of producing the party’s national chairman.
Follow Us on Twitter!