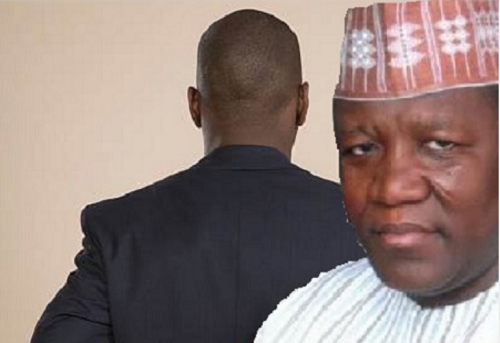 A suspect, Mr. Ifeanyi Okafor, has told the Economic and Financial Crimes Commission (EFCC) detectives that he was a “fictitious consultant” to the NGF, which paid him $3 million from the loan repayment to states.
According to The Nation Newspaper, the suspect said his company, Mountain Crest, was hired by the Governors Forum for an unexecuted consultancy job, it was learned yesterday.
Apart from  Ifeanyi, four other consultants have been invited for interrogation by the anti-graft commission.
According to a source, who pleaded not to be named in order not to jeopardize the probe, the commission has approached the court for the forfeiture of the following: N1. 230billion by Melrose General Services Company; N500million by a governor; and $1million and N100million paid to Gosh Project by Mountain Crest Limited.
The source said: “We have gone to court on some payments made to some consultants by the NGF. We filed two applications before the court, but we could not secure final forfeiture because the court was on vacation and the matters were adjourned till October.
“Our detectives found that N3.5billion was paid to Melrose General Services Company but only N1.2billion was discovered when the investigation of the diversion of the London-Paris Club refund started. We have initiated a court process for the final forfeiture of the N1.2billion to the Federal Government. We need to perfect the forfeiture with a court order.”
Of the cash given to some entities through Melrose, N220 million has been recovered into the Federation Account.
“The Managing director of Xtract Energy Services, a company that deals in Forex Trading, confirmed that Wasp Networks Limited transferred N170, 000,000 on the 16th January 2017 to Xtract Energy Services Limited’s FCMB account for the purchase of $350,000 which he later transferred into Wasp Networks Stanbic IBTC US dollar domiciliary account,” the source said, adding.
“Wasp Networks has returned to the EFCC the N200million paid to the company by Melrose General Services.
“Melrose General Services Company paid N20million to Thebe Wellness Services. The managing director of Thebe Wellness Services confirmed that N20million from Melrose General Services Company was a loan which was to be used as an investment in Thebe Wellness Services.”
On the $3million traced to a company, Mountain Crest Limited, the source said one Ifeanyi Okafor had admitted that the consultancy  contract was fictitious.
The source added: “About $3million was paid into the corporate  account of Mountain Crest Limited by the NGF.  From  the cash, $1million was remitted into the account of a company, Gosh Project. We have succeeded in recovering $500,000 which we transferred to the government’s account. But we have applied to the court for the final  forfeiture of the money.

“Out of the balance of $500,000, we got another N100million from Gosh Project. The recovered cash was part of what was invested in Treasury Bills. Another share of the money is being used for a hotel project in Lekki, Lagos State.”
Responding to a question, the source said: “The EFCC is going to recover the remaining $2million and it will charge the company and all those involved to court with corrupt payment,  aiding and abetting diversion of public funds.”

Okafor was said to have submitted letters from the NGF appointing Mountain Crest as a consultant, but, he later confirmed that the  $3million contract was fictitious.
“There are clues that the $3million consultancy job was given to Mountain Crest Limited to launder funds for another governor,” the source claimed, adding that “four consultants, apart from Ifeanyi, will also face trial soon”.
On the diverted N500million, which was linked with a governor through a mortgage bank, the source said:  “The EFCC filed an ex-parte motion on 19th June 2017 for the Interim Forfeiture of the cash and our request was granted by   Justice Nnamdi  Dimgba  of the Federal High Court, Abuja.
“All we  are waiting for is an order for the final forfeiture of the money by the governor who we cannot prosecute now. Certainly, the governor will face trial after the completion of his second term in office.”
Asked of the next stage of the investigation, the source said: “We are investigating the utilisation of the London-Paris Club refunds by states. Also, in addition to the 5% paid by states to the centralised NGF account, some state governments further engaged consultants, with some paying  2.5% and 15% of the collectible fees to these consultants.
“We will look into the books of all the states but we are looking at the payment  to consultants in five states at present. They are Bauchi, Delta, Abia , Cross River and Nasarawa.
“Our team will review the list of consultants,  how much was paid to them, who actually benefited and we will determine whether or not there was evidence of corrupt payments.”
Following protest by states against over deduction for external debt service between 1995 and 2002, President Muhammadu Buhari approved the release of N522.74 billion (first tranche) to states as refund pending reconciliation of records.
Each state was entitled to a cap of N14.5 billion being 25% of the amounts claimed.
The second tranche of N243, 795,465,195.20 was disbursed to states in July.
The Minister of Finance, Mrs. Kemi Adeosun, said the payment of the claims would enable states to offset outstanding salaries and pension which had been “causing considerable hardship”.
The governors sought for the refund to states and local governments at a meeting with Buhari on May 24, last year.
Follow Us on Twitter!