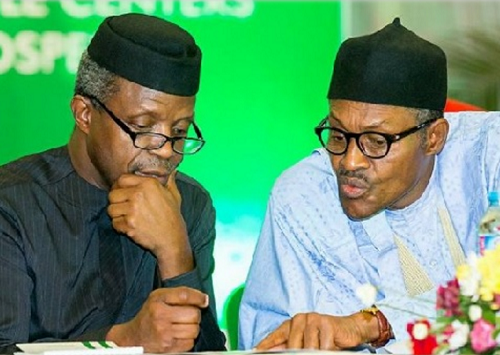 Barring any late change, President Muhammadu Buhari is set to rejig his cabinet.
The president returned to Nigeria, from London, United Kingdom, yesterday evening.
He touched down at the Presidential Wing of the Nnamdi Azikiwe International Airport in Abuja at  7:00pm.
He  was received at the airport by his Chief of Staff, Abba Kyari, Minister of the Federal Capital Territory, Muhammad Bello and Inspector General of Police, Ibrahim Idris, among other dignitaries. He reportedly arrived the Presidential Villa, 30 minutes after.

The president went to London from New York, the United States of America, where he attended the 72nd United Nations General Assembly.
Last Tuesday, he addressed world leaders and, in his address, harped on the need to fight corruption, both locally and internationally.
The following day, president Buhari, alongside seven African leaders, had lunch with US President, Donald Trump.
Regardless, the cabinet could be rejigged on or before Nigeria’s 57th independence anniversary.
Presidency sources said a cabinet shake up had been on the cards “for a long time now. In fact, the final list is already with the president.”
Another source said the reshuffle confirmed the rejig had been in “the works. Security checks have been concluded and a list of those to be dropped have been tabled before the president. In fact, the reshuffle was to have been done three weeks ago.”
Yet, another presidency source confirmed that “some ministers will be sacked, but Nigerians will definitely be surprised at the calibre of those who will be dropped from the cabinet.
“Although there may or may not be wholesale dissolution, some ministers will still be re-nominated while, for some, they may likely be attending their last Federal Executive Council meeting tomorrow.”
Senior Special Asssistant to the president on Media and Publicity, Mallam Garba Shehu, however, denied knowledge of any cabinet reshuffle.
“I’m not in Abuja and I don’t know what is happening there,” he said yesterday night.
Daily Sun also gathered that “the fate of the suspended Secretary to the Government of the Federation (SGF), Babachir David Lawal and Director General of the Nigeria Intelligence Agency (NIA), Ayo Oke, will be decided at tomorrow’s FEC.”

On April 19, 2017, the president suspended Laval and Oke from office and ordered an investigation into allegations of violations of law and due process levelled against the SGF, in the award of contracts under the Presidential Initiative on the North East (PINE).
Senate had earlier accused Lawal of corruption, by awarding a N200 million grass-cutting contract at Internally Displaced Camps (IDPs) in the North East, to his company.
The president also ordered full scale investigation into the discovery of $43 million and other large amounts of foreign and local currencies by the Economic and Financial Crimes Commission (EFCC), in a residential apartment, at Osborne Towers, Ikoyi, Lagos.
The NIA claimed the money belonged to it and was part of its operations.
On August 23, 2017, Vice President, Yemi Osinbajo, who chaired the committee which investigated Lawal and Oke, submitted a report to the president, on his return from medical vacation in London.
Thereafter, Osinbajo told newsmen that the president has the final say on implementation of the report.
“The president…is the one who will read the recommendations and the facts and then make a decision,” said Osinbajo.
Source: Daily Sun
Follow Us on Twitter!