Home » news » OMG!!! Read Heartbreaking Details Why ‘Biafran Govt’ Must Banish Fr. Mbaka From Biafraland, His Latest offence Will Shock You {Must Read}

OMG!!! Read Heartbreaking Details Why ‘Biafran Govt’ Must Banish Fr. Mbaka From Biafraland, His Latest offence Will Shock You {Must Read} 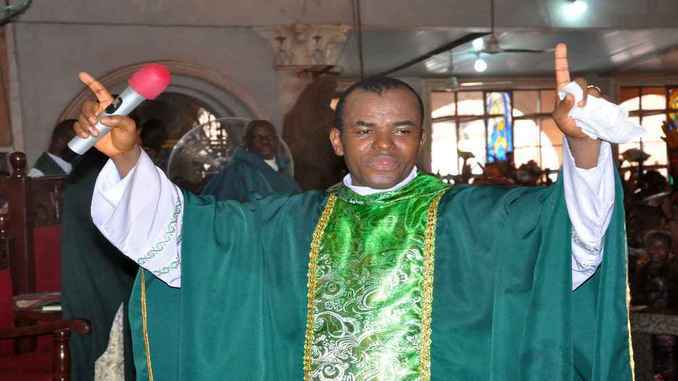 A lawyer and the leader of the Biafra Zionist Federation, Benjamin Onwuka, has said the “Biafran government” would, when fully functional, banish the founder of the Adoration Ministry, Enugu, Rev. Fr. Ejike Mbaka, from “Biafraland.”
Onwuka recently announced the formation of a Biafra government, which included an economist, Prof. Pat Utomi; a former governor of the Central Bank of Nigeria, Prof. Charles Soludo; and former information ministers, Prof. Jerry Gana, and Mr. Labaran Maku.
There are reports that the Department of State Services was investigating those named in the “cabinet” but Onwuka has insisted that the government was “intact” and awaiting recognition by the United States America.
Speaking in Enugu on Tuesday, Onwuka said Mbaka and some other clerics were sabotaging the agitation for Biafra.
He said his “Biafran government” would send such clergymen away from Biafra.
Onwuka also threatened to confiscate the Adoration Ground, the worship centre of Mbaka’s Adoration Ministry.

According to him, Biafra agitators have marked Mbaka as an ‘enemy of Biafra.’
He warned Mbaka specifically, saying, “The Zionists are warning Ejike Mbaka that he is putting his Adoration Ministry on the line.
“All the clerics supporting these killings would be sent away from here by the ‘Biafra government’ and we will take over that his Adoration Ground.
“Attacking us and calling us names is unacceptable. People are being killed every day, has any of them come out to speak against it? We have marked Mbaka as enemy of Biafra.”
He said the proscription of the Indigenous People of Biafra would not have any effect on the restoration of Biafra.