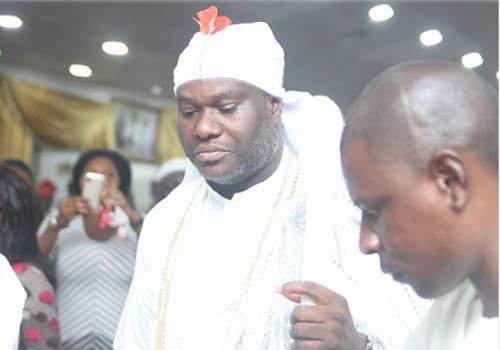 The annual Olojo festival in Ile-Ife started on Friday with the historic appearance to the public of His Imperial Majesty Ooni Adeyeye Enitan Ogunwusi Ojaja II to receive his numerous guests that are in Ile-Ife from all parts of the world for the historic festival which commemorates the creation of mankind.
Ooni, the Spiritual leader of the Yoruba race worldwide terminated his seclusion that had kept him incommunicado in the last one week arrived the palace from ILOFI where the spiritual seclusion had taken place accompanied by the notable Ife indigenes and High Chiefs. He was received by a mammoth crowd of participants.
He was seen offering prayers to the multitude of participants who were in batches paying homage to him on the sacred throne of Oduduwa, the progenitor of Yoruba race.
ILAGUN, a very sacred aspect of the festival celebrating the relevance of OGUN(god of Iron) to the creation of the world had earlier taken place at OKEM'OGUN shrine located at Enuwa, Ile-Ife.
Leading a team of the Afro Caribbeans, Mr Arthur Brown said the festival is an impactful connection between the Afro Caribbeans and their brothers at home in Africa.

"This is awesome, I have never been fulfilled like this in my entire life. The opportunity this festival has given us to connect with our ancestral home is amazing and we must consolidate on it". Arthur Brown said.
A tourist from Ghana, Imahkus N. Okofu said
"today is such an exciting time as this affords all the Africans to come together for  a common cultural identity for stability and prosperity".
"A lot of Africans from outside Nigeria regard Ile-Ife as their origin and are eager to visit here".
"As an American, I relocated to Ghana 10 years ago and I got my citizenship of the country last December".
"It is now my responsibility to ensure homecoming of our fellow Africans in Diaspora".
This year's Olojo Festival continues on Saturday when the Ooni is expected to appear to the general public with the sacred AARE crown that is worn once in a year.
Follow Us on Twitter!