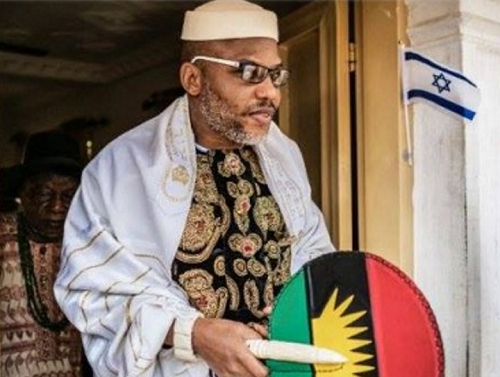 The youth wing of the Igbo socio-cultural group, Ohanaeze Ndigbo, has given its support to the decision by South East governors to proscribe the Indigenous People of Biafra (IPOB).
The group also entered into an agreement in Abuja yesterday with leaders of other ethnic nationalities in the country to promote peace and ensure the safety of every Nigerian.
In a communique issued at the end of the leaders of ethnic nationalities meeting held at FAB Apartments, Abuja, the Ohanaeze Youth Council reassured all Northerners and members of other ethnic nationalities resident in the East to go about their businesses without any fear as the safety of their lives and properties is guaranteed. NAWA
Similarly, the Coalition of Northern Groups (CNG) reassured the Igbo and other ethnic groups resident in the northern part of the country of the safety of their lives and property, and the guarantee that they reserve the right to pursue their legitimate businesses and livelihood without fear.
The meeting, which was attended by the Ijaw Youth Council (IYC), Yoruba Youth Congress (YYC), Niger Delta Youth Congress (NDYC) and a host of other groups, restated the group’s commitment to a united, peaceful and prosperous Nigeria where the rights of all citizens to live peacefully in any part of the country is guaranteed, adding that all Nigerians have the moral duty to be their brother’s keeper in all parts and affairs anywhere in the country.
The leadership of the OYC in a separate statement signed by the President, Mazi Okechukwu Isiguzoro; the Deputy National President, Dr Arthur Obiora;  the Secretary General, Mazi Okwu Nnabuike and other executive members called on President Muhammadu Buhari to urgently commence the process of restructuring the country by marching words with action.
”We are saddened by the level of confrontation between the Nigerian Army and the Biafra agitators and the consequent death of many Igbo youths in the process.
“We are also sad over the reported death of a policeman during this unfortunate but avoidable incident. We say avoidable in the sense that before the launch of Operation Python Dance 2, there was already a reasonable level of discussion between us and the agitators.
“We are equally aware that South-East governors were also in discussion with the agitators before the military launched its action.

“However, considering the level of destruction and ruins that could have erupted, we applaud the South-East governors for rising to the occasion.
“It was indeed the need of the moment. We cannot afford to continue to lose the lives of our people, in addition to over three million killed during the civil war,” the group said.
The OYC, however, noted that proscribing the IPOB was merely a temporary measure, adding that if the root causes of the agitations were not addressed, “we would not be any surprised if another group more daring than IPOB springs up in the future.
“While we affirm our belief in one and united Nigeria anchored on justice and fairness, we insist that the country should be fair and just to all irrespective of ethnicity or religion.
“The Igbo are equally partners in the Nigerian project and should, therefore, be treated fairly.
“We commend Governor Okezie Ikpeazu of Abia State for his mature disposition in handling Aba crisis, and South East National Assembly members led Ekweremadu.
“May we also urge the President to pardon and release all the IPOB members arrested during the reported confrontation with the military.”
Follow Us on Twitter!