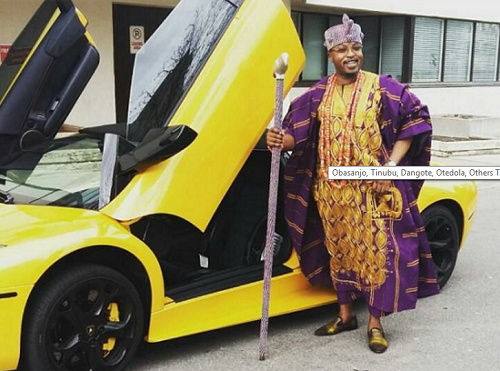 The former President Olusegun Obasanjo, and the national leader of the All Progressives Congress (APC), Asiwaju Bola Ahmed Tinubu, are among the many dignitaries expected to storm Iwoland for the second anniversary on the throne and 50th birthday of the Oluwo of Iwoland, Oba Abdul-Rasheed Adewale Akanbi, Telu I on the 7th October 2017
According to a statement released to the media by the paramount Osun monarch, others eminent Nigerians expected to grace the twin events are; Alhaji Aliko Dangote, Mike Adenuga and Femi Otedola as well as Akin Ogunbiyi and Wale Babalakin.
He said Osun State Governor Rauf Aregbesola will be the chief host to the invited guests.

The statement added that traditional rulers expected at the event are Sultan of Sokoto, Muhammadu Sa`ad Abubakar, Emir of Ilorin, Ibrahim Sulu-Gambari, Orangun of Ila, Oba Abdulwahab Olukayode, Olugbo of Ugbo Kingdom, Oba Obateru Akinruntan, Osile Oke Ona Egba, Oba Adedapo Tejuoso, Etsu of Nupe, Alhaji Yahaya Abubakar, Ataoja of Osogbo, Oba Jimoh Olanipekun, and  other high ranking monarchs.
Oba Abdul-Rasheed Adewale Akanbi, Telu I, appealed to indigenes of Iwo home and in diaspora to come together at home and contribute their quota to the development of the town as he marks his second anniversary on the throne and 50th birthday
The monarch said the best they could do as indigenes is to invest in the many community projects in Iwo.
He said: “As a responsible father I am thirsty of development. There are two Iwos: the old Iwo and the new Iwo. The new Iwo is the best because we have migrated from obscurity to light. The name is everywhere now and big investments are underway.