Home » news » Notorious Cultist Who Killed Over 30 People Paraded With Other Criminals In Rivers. (Photos)

Notorious Cultist Who Killed Over 30 People Paraded With Other Criminals In Rivers. (Photos) 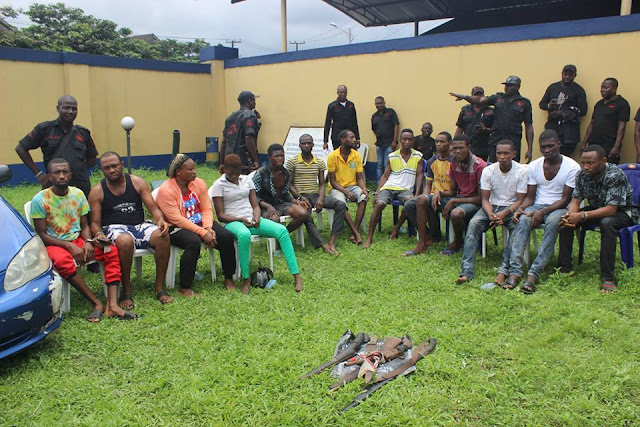 Men of the Anti- Cultism Unit (ACU) in a covert operation arrested one Lucky Mark Aminikpo, a notorious cultist who has confessed to have carried out several cult activities in Ahoada and its environs including burning four houses and killing the following persons namely; Highman Lucky ‘m’, Bobo ‘m’, Wisdom ‘m’, and Daniel ‘m’, he confessed to have beheaded Highman. He is a member of Dey-Gbam cult group. He is helping the Police and will be due in court soonest.
Also the Anti-cultism Unit in another Operation arrested one Lekia Deemua ‘m’ from Okwali Community in Khana LGA. The suspect who is a notorious cultist confessed to have burnt three houses, killing about 30 persons of a rival cult group in Okwali community among other criminal activities carried out by his cult group. He is helping the Police, as efforts are on to arrest members of his cult group.
Again, operatives of the Anti-Cultism Unit acting on a credible intelligence arrested the duo of Destiny Vincent ‘m’ and Blessing Isaac ‘m’ who are confessed members of Dey-Well cult group and the criminal gang terrorizing Ubio/Abarikpo Community in Ahoada Local Government Area.

The duo were arrested at Tombia Street, GRA Port Harcourt. And on interrogation have confessed to belonging to Dey-well, whose recent activities led to the burning of houses at Abarikpo in Ahoada West Local Government Area and also responsible for the kidnap of their paramount Ruler. In another covert operation, men of the Anti-Cultism Unit on 9/9/2017 arrested Chris Jerry ‘m’, Lawrence Promise ‘m’, Stanley Nduka ‘m’ alias Star Boy ‘m’, Joy David ‘f’ and Ebikeme Eric ‘f’.
The suspects were arrested at Chokocho in Etche Local Government Area and have confessed to belonging to a gang of armed robbers, terrorizing Etche and its environs, one of their victims was a man whose Honda Pilot was robbed and sold for N500,000.00. Items recovered from them include’s one cut to size locally made single Barrel gun with live cartridges. They are being questioned and will be arraigned in Court very soon.