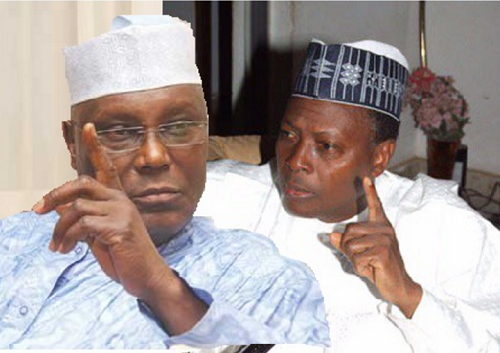 Former vice president, Atiku Abubakar has taken northerners who are opposed to the current clamour for the restructuring of the nation to the cleaners, accusing them of laziness.
“I don’t know what those who are against restructuring are afraid of. Those afraid must be lazy,” he declared.
Atiku who spoke last weekend in Abuja while delivering a keynote address at a youth forum organised by a conglomeration of civil society groups under the auspices of Play Forum, said he would continue to speak against the current faulty ‘unitary federalism’ structure even at the detriment of his political ambition.
“I want to agree essentially that there is every need for us to sit down and talk about our future. This is because the arrangements in the last 50 years or so have not served us very well.
“I am not a product of the current structure of Nigeria. I am a product of regional government. I saw the government at work and I have also seen the current arrangement at work.
“That was why I came out, some people even said to the detriment of my political career, to advocate for restructuring or rearrangement or whatever you call it, of the present structure of the country. I still stand by it. But we cannot determine the nitty-gritty of this restructuring until we are able to dialogue and agree on how we want to continue to live together as a country.
“It is good that all the representatives of the ethnic groups agreed that we should continue to live together. I believe it is imperative. But I also don’t believe in the current arrangement, which I have always referred to as unitary federalism, which was a creation of a prolonged military rule.
“It all started after the civil war, when General Murtala Mohammed set up the Constituent Assembly of 1978 and specifically instructed the Assembly to recommend a very strong Federal Government which no component can challenge or try to secede from. He was understandably coming from the perception of Biafra civil war. He felt that the war was caused by the region, which felt that it was too independent to pull out of the country. Subsequently, they kept amending the constitution centralising more and more power at the centre,” he said.
The Waziri Adamawa blamed the current political structure on the failure by military government to implement the Constitutional Conference of 1994/1995 recommendation of a single term of six years for the president to rotate among all the six geo-political zones.
“Of course, I was a member of the Constitutional Conference of 1994/1995, and what we actually drafted was not what they eventually came out with. We proposed a presidential system with single term of six years to be rotated among the six geo-political zones of the country.
“By now, about four zones would have produced the president. We also said that after 36 years, we could review that provision if Nigerians believed it is the best season, otherwise we could discard it.
“By the time we won election in 1999, we saw an entirely different constitution. I was told that they set us a review committee headed by Niki Tobi (retired Justice of the Supreme Court), which tampered with the draft and ended up with the constitution we now have today. However, on a serious note, we have seen that the fact that a zone produced a president does not mean that he will get the zone developed. Former president Jonathan could not construct a road from Port Harcourt to Bayelsa.
“Even the South West road we started during our administration, he could not continue. Until former president Obasanjo finished his eight-year term, he could not complete the road from Lagos to Otta where his farm is.
“Another issue that needs restructuring is the economy. Left for me, I will ask every part of this country to take charge of its resources while the Federal Government should handle defence, foreign affairs, and immigration among others in the Exclusive List.
“I use to tell people that I would not have gone to school if I was born today. My parents were so poor they won’t afford to send me to school. I was born during the era education was free, food was free for me, I was sponsored from primary school to university. There was even a job waiting for me before I graduated. Yet there was no oil then. I am not certainly a product of oil boom Nigeria.
“So, I don’t know what those who are against restructuring are afraid of. Those afraid must be lazy. We fought the civil war with the Igbo. Today, the Igbo have been completely rebuilt, but we still find mud houses in the north. Is it the fault of the easterners that the north is like that?” he queried
“So, there are more fundamental issues that we need to deal with after which we would have settled on what basis we want our federation to be. How do we draw the boundary because even the Ijaw are not contiguous to each other. I come from a state where we are minorities. In Adamawa, whether you are Hausa, Fulani, Christian or Moslem, you are from the minority. It is the same thing in Taraba.

“I think that what is most important is the devolution of powers and resources with the various governments whether states or regions. How do the people hold those in power accountable for the resources handed over to them? We are not as educated as we are today in the First Republic, yet it beats my imagination how those in charge of the local governments were more efficient, honest and transparent in accountable administration Since we have agreed to remain one successful country, it is not complicated because you can start with all the recurrent items in the constitution. The president can dialogue with the governors or National Assembly for states to take charge of the roads, hospitals, schools and such other items in the Concurrent List while the Federal Government will continue with items on the Exclusive List.”
Northerners yesterday reacted to the comment by the former vice president.
Firing the first shot, second republic lawmaker, Dr. Junaid Mohammed, said he was engaging in “hyper media” activities in recent times for two major reasons: commercial and business interest and to be in power to make more money.
Junaid was, however, quick to warn that the north in particular and Nigeria in general, was not for sale, adding that he (Atiku) cannot be Nigeria’s president by insulting the north, insisting that Atiku was part of the reasons the region was being vilified by southerners.
He said he came to that conclusion because an average southerner believed that northerners have made so much money through their positions in government and politics in the country.
“Atiku is a scoundrel and a bloody nonentity.  He attained political limelight because the late Musa Yar’Adua put him there; today he wants to position himself as the leader of the north. But the north doesn’t give people of no consequence such position. His interest is not really about restructuring. He thinks by insulting the north, the same way we are being insulted by the south, that will give him presidency With this kind of attitude, he can’t be the president of Nigeria. He will hear from the north at the appropriate time. He is one of those making the south to abuse the north. He is angry because his monopoly in the oil servicing sector has been broken.  His wealth will never buy him Nigeria’s presidency. The north is not for sale, Nigeria is not for sale. I pray God sees us beyond 2019, let him challenge me, if he ever becomes Nigeria’s president,” Mohammed fumed.
On his part, former Lagos State Police Commissioner, Alhaji Abubakar Tsav, said Atiku needed to go back to history.
“I disagree with Atiku Abubakar that Northerners who are opposed to restructuring are lazy. Restructuring which provides self-determination to the regions but does not affect the unity and oneness of the country is welcomed. That is the position of most Northerners. Atiku needs to go back to history. What are we restructuring in the first place?”
When contacted, leader  of the Northern Elders Forum (NEF) and second republic minister of steel, Wantareph Paul Unongo, declined to comment, saying, “I will make a statement on it at the appropriate time.”
But the Arewa Consultative Forum (ACF) General Secretary, Anthony Sani, said: “I would believe the former vice president Atiku has his own reasons for saying that the North opposes restructuring because northerners are lazy. I do not share such views. You would recall we have said that because restructuring means different thing to different groups, we are unable to make any informed decision on the subject matter. This is because there are those clamouring for true federalism, some others for fiscal federalism and some groups hanker for resource control. Yet, we have those who tout resource ownership.
“It is against such backdrop that the Northern states Governors Forum has set up a committee to collate the opinions of stakeholders across the North with a view to informing their position on restructuring for the North. I do not see the wisdom in all the talks about restructuring by some elite, as if they do not know how democracy works. I believe we should let those political parties, which wish to restructure the country by way of far-reaching reforms of the polity to reflect such reforms in their party manifestos and campaigns for the mandate needed for implementation. I think it is undemocratic and morally preposterous to demand restructuring of the country based on recommendations by unelected platforms or individuals. Let political parties do their job democratically for larger interest.”
Follow Us on Twitter!