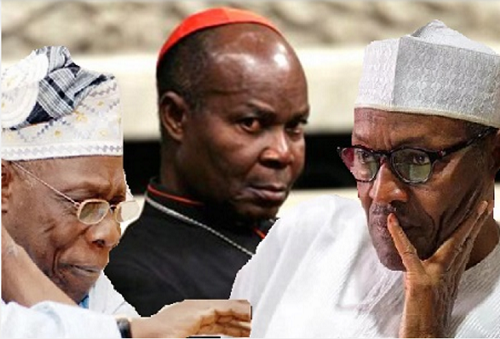 The Archbishop Emeritus of Lagos Archdiocese and former President of the Christian Association of Nigeria (CAN), Anthony Cardinal Olubunmi Okogie, yesterday argued that Nigeria would be worse off should President Muhammadu Buhari gets a second time in office.
The cardinal in a telephone interview with Saturday Telegraph, stated that Buhari’s performance so far had been below the average mark, which does not support the calls for his second term. This is coming on the heels of another bombshell from former President Olusegun Obasanjo, in which he carpeted the president as not doing enough to expand agriculture business and youth employment in Nigeria. Obasanjo who was quoted by a Liberian Magazine, AfricanArguments, explained that, “Buhari has made some announcements.
He had tried to keep on going in the area of agribusiness, but not enough. “It is not yet enough to prepare the ground for uninhibited growth of the economy, which we need. Is Buhari doing enough about it? I don’t believe he is.
Can he do enough about it? Of course he can”, the ex-president said. Obasanjo also maintained: “All youths in Nigeria have legitimate reasons to feel frustrated and angry,” noting that some of those protesting “don’t even know what the struggle is all about, but if it gives them false hope, why not hang onto it?” Okogie, who added that the president’s first term report card would be a stumbling block for his quest for re-election, said those calling him out for another shot at the presidency do not mean well for Buhari and the nation. They are simply enemies of Nigeria, he insisted. He said: “As far as Cardinal Anthony Okogie is concerned, his first term is bad; I think it’s below the average mark.
So, this will not give him a better chance to stand for a second term. From what is on ground, I don’t think he will get anywhere. “The main thing that Nigerians want now is to see the dividends of democracy in action.
They are telling us that we have pulled out of the recession. Go to the market, there’s nothing like that. There’s no sign of improvement. What is sold for N10 still sells for N10 or even at N12. Is that what you call improvement of the economy?
“They promised to do everything but on getting into saddle, they keep procrastinating. Look at the state of the nation today. It’s as if there is no government.” Okogie also lampooned the legislature, saying they are moving the country backwards.
“Look at the parliament, what are they doing in the House of Representatives? What are they doing in the Senate? What are the socalled big men doing? It’s very painful. We are going from bad to worse. Very soon, we’ll get to worst if there’s no change before December.
“Everybody is taking the laws into their hands the way they like. Would you call this a nation? You can’t walk freely on the street. You are not sure of having a meal per day. You are not sure of seeing tomorrow.
“People are not asleep. People are opening their eyes every day to see what these people are doing. And that is why they are struggling to have their man at the top. There are many other people lined up. And we’re talking about Buhari and Atiku.
Can they even win the primaries? These noisemakers are just making people to know that they are alive,” he said. Also speaking, Bishop Steven Ogedengbe, presiding bishop of Evangelical Ministries (a.k.a Wisdom Chapel), Akowonjo, Egbeda, Lagos, said that those who love the president should preoccupy themselves with prayers for God to help him finish the first term. Second term, according to him, has not even come into the equation because God is the owner of time and purpose.
“Anybody talking about second term is deceiving Buhari. He had not been able to travel to any part of our country to inspect projects.He had never been to Ibadan, for instance, for almost two years now. He doesn’t know what is going on in Benin. He doesn’t know what is going on in Akure.
He didn’t even go to Kaduna for the graduation of the Nigerian Defence Academy (NDA) recently. “He didn’t sign our budget this year. So, second term is not realistic for now. We should all forget about that.

God should let him continue this term and he should be faithful enough like Nelson Mandela to honourably step aside after that, and also join hands with an eligible person who can take over from him and perform.
“We are not too bad. We are over 180 million people. So, for me, I think the man should relax if God helps him to finish the first term. Second term, no! He should work hard for anybody who is coming to take over from him. God bless Nigeria”, the cleric said.
But these are not the first set of people to query the rationale behind the calls. The Saturday Telegraph had recently sampled opinions, in which some respondents had called to question, the basis for the second term calls.
Earlier in the month, an elder statesman and leader of the Northern Elders Council (NEC), Alhaji Tanko Yakasai, said: I don’t advise anybody to contest in election, it is a personal decision and someone has to make up his mind to contest or not.
So, I won’t advise President Buhari to recontest or not. I don’t want to waste my time talking about 2019 elections when we still have two years to come. Let us talk more about things that would be beneficial to Nigerians. I don’t believe in speculations.
In the same vein, a chieftain of the National Democratic Coalition (NADECO), Chief Ralph Obioha, said it is a free society and anybody could start campaigning anytime, insisting that people could start campaigning whenever they want. According to him, the campaign for 2019 elections is not too early and Buhari has the right to seek for re-election in 2019. “It is his choice to decide and not for anybody to decide for him. He is the one who will make the calls.
It is his decision to determine whether to recontest in 2019 or not. On his part, a former governor of old Kaduna State, Alhaji Balarabe Musa, said there is nothing wrong starting 2019 campaign now as long as political parties exist.
“Campaign is a continuous thing and I don’t know why anybody should not be allowed to campaign. As long as we have political parties that are aspiring to contest in any election, campaign can start. Political parties are meant to campaign for support.
It is a continuous thing. On whether President Buhari should re-contest in 2019 or not, Obioha said that is his own decision. “As far as I am concerned, it is left for him to decide whether to contest or not.
Only Buhari can determine whether to run in 2019 or not. The decision is left for him, the APC and the electorate. Afenifere chieftain, Chief Ayo Adebanjo, was not left out of those that gave their opinions, saying that kick-starting campaign for 2019 elections is a misplaced priority.
“What should be paramount now is to address all the various agitations in the country and the national question. My own logic is that without political stability, there can be no peace and without peace there can never be progress. “Those speaking about 2019 presidency now are playing with fire,that is not the quest for now.
Shall we not survive before the 2019? And for us to survive as a country, we must solve the conditions of leaving together as a federal system before we go for any election. If we don’t, there would be chaos. I believe strongly that the issue of restructuring of Nigeria must be addressed before the 2019 elections.