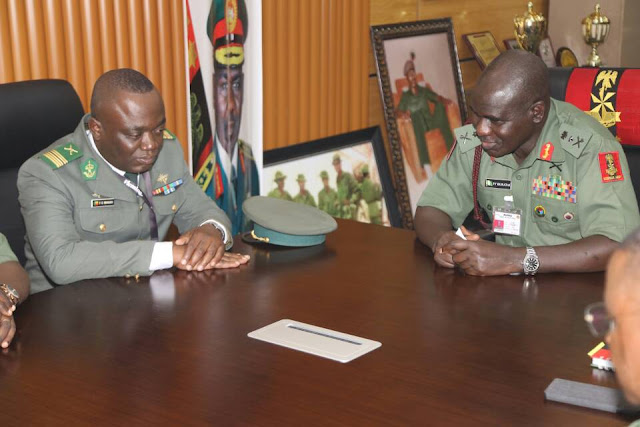 The Chief of Army Staff of the Republic of Benin, Col.Fructeux Abdias, has commended the Nigerian Army for its role in ensuring peace in the West African sub-region and the world.
Abdias made the commendation when he visited his Nigerian counterpart, Lt.-Gen. Tukur Buratai, at the Army headquarters in Abuja, according to a statement issued by Brig.-Gen. Sani Usman, the Army Spokesman on Thursday.
Usman said the Benin army chief used the visit to solicit for “enhanced bilateral relationship between” his Army and that of Nigeria.
Abdias noted that the Nigerian Army had been playing a critical role in peace restoration and maintenance in the region and globally.

He came to Nigeria to participate in a two-day seminar on land forces in West Africa.
Buratai thanked him for the visit and assured him of the support of the Nigerian army.
He said that both Armies had had a long cordial relationship and that they were best of friends in various peacekeeping operations, including current Multinational Joint Task Force fighting insurgency, as well as ECOWAS missions.
The Nigerian Army Chief urged the Benin Army to take advantage of the Nigerian Army training facilities to strengthen its personnel.
Follow Us on Twitter!