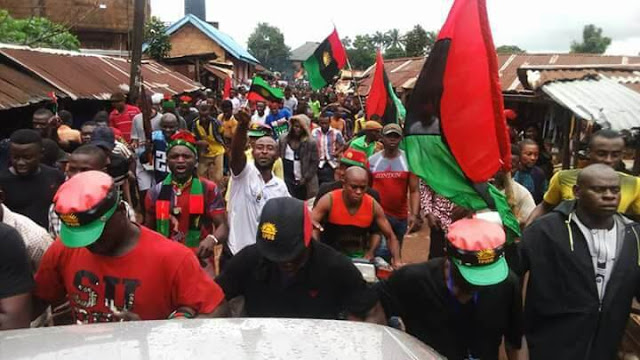 A Chief Magistrate Court sitting in Umuahia, Abia State, on Monday remanded 60 members of the Indigenous People of Biafra (IPOB) at the Afara Federal Prisons in Aba.
The magistrate ordered that the I​POB members be remanded in prison after their counsel challenged the jurisdiction of the court to hear the matter.
The magistrate, who had directed that the case file be transferred to the Department for Public Prosecution (DPP) for advice, later adjourned the case till October 25.

The​ agitators were among those arrested by security agents in Umuahia, Isiala Ngwa and other parts of the state capital during the clash between the army and members of the separatist group.
Abia state Police Public Relations Officer (PPRO), Geoffrey Ogbonna, said the IPOB members​ were arraigned on an eight-count charge of conspiracy, terrorism, attempted murder, membership of unlawful society and rioting, among others.
Meanwhile​, Anambra Youth Movement, AYM, has vowed to liaise with youths from other South-East states to shut down the region over the onslaught against IPOB, as well as refusal of Nigerian government to heed calls for restructuring.
Follow Us on Twitter!