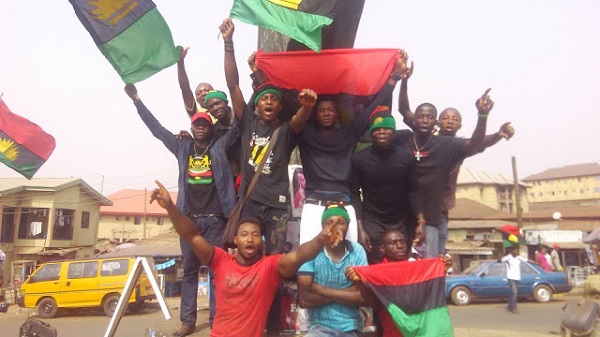 Pro-Biafra group, the Indigenous People of Biafra, IPOB, has raised alarm over an alleged plot by the Nigerian government to implicate its members in a bid to justify its proscription and classification as a terrorist organisation.
The group in a statement sent to ORIENTAL TIMES, it’s media and publicity secretary, Comrade Emma Powerful narrated that “the Nigerian Army will take condemned criminals from prisons, dress them in military uniforms, then execute them during an unprovoked attack to make it seem that IPOB killed Nigerian soldiers.”
The statement reads in full:
We the family of Indigenous People of Biafra (IPOB) worldwide under the command and leadership of Mazi Nnamdi Kanu wish to urgently draw the attention of the civilised world to the dastardly plot being perfected by the APC Hausa Fulani led Islamic government of Nigeria against peaceful unarmed members of IPOB residing in Biafra land in the next few weeks.
IPOB Intelligence Unit have uncovered elaborate plans by the Islamic APC government of Buhari to incriminate IPOB members in order to justify their controversial and unpopular proscription of IPOB with the attending laughable tag of terrorist organisation against a world recognised peaceful movement.
This Islamic Hausa-Fulani controlled and dominated security apparatus in Nigeria led by Muhammadu Buhari have resolved to commence another round of their periodic genocidal massacre of innocent civilians across South East and South South within the next few weeks under the cover that IPOB is a terrorist organisation.
They have concluded in their sadistic minds to kill as many people as possible.
They want to spread terror, intimidation and instill fear in the minds of those that will survive this massacre and cause our people to renounce or abandon their legitimate quest for freedom.
The plan is to bring the people of old Eastern Region to submission before 2019 presidential elections.
In the meeting where they concluded this devilish line of action, they boasted that they have succeeded in bringing some South East and South South politicians, especially South East governors under their control, what was left for them to complete the conquest and subjugation of entire Biafraland are the youths.
Tagging IPOB a terrorist organisation and having such authenticated by a court of law was the first crucial step towards setting the stage for the impending genocide.
The wholesale massacre is scheduled to begin in precisely three weeks time.
The military, police and the DSS exclusively staffed by Hausa-Fulani Islamic extremists would carry out murderous simultaneous raids across South East and parts of South South to eliminate tens of hundreds of young men under the guise of hunting for IPOB sympathisers.
They assumed that having successfully bought over the conscience of South East governors to join them in their genocidal plot with promises of second tenure in office, they can proceed to execute their plan with nobody standing in their way.
To justify and make this genocidal act against the people look real, the Nigerian Army will take condemned criminals from prisons, dress them in military uniforms, then execute them during an unprovoked attack to make it seem that IPOB killed Nigerian soldiers.
They will then call a world press conference to show the media corpses of ‘solders’ killed by IPOB in order to justify their decision to tag IPOB a terrorist group and hopefully dent the standing of IPOB in the eyes of lovers of freedom all over the world.
This evil plan will also involve burning down some police stations in the Eastern Region with claim that it was done by IPOB sympathisers loyal to the leader Mazi Nnamdi Kanu.
It is presently clear that a special squad has been trained to spearhead and carry this plot to the letter.
The plan is to trigger an ethno-religious crisis of immense proportion as a prelude to unleashing what they termed the final solution to the Igbo question in Nigeria.
South East governors who till date could not defend their states against wave after wave of Fulani herdsmen murderous invasion, have gladly volunteered, in exchange for a second term in office, to collaborate with Arewa North to inflict another genocide on the people of Biafra.
South South is not left out of this plot because the plan also is to instigate crisis of confidence so that South East and South South can never come together to forge a common position.
After all the only resource that sustains the economy of Nigeria, crude oil and gas, are found only in South East and South South both of which make up Biafraland.
So dividing them makes it easier for Arewa North and their co-conspirators to continue the ruthless exploitation and subjugation of Biafrans.
In the pursuit of this divide and conquer agenda, there is a plan to appoint a person from “South South” into “a powerful” office in the Federal government either into the office of Chief of Defense Staff or Secretary to the Government of Federation.
This individual will be given the responsibility of ensuring that the people of South South do not rise in opposition when the massacre of Igbos gets underway.
The idea is to highlight, magnify and amplify perceived differences between South East and South South by Hausa-Fulani controlled North as they did during the war and with abandoned property afterwards.
Further, it would make the unsuspecting “South Southerners” think that they have to save their brother’s appointment by dissociating themselves from the Biafra restoration project.

Furthermore, to seal this well orchestrated evil plot, the Arewa North will soon appoint a Yoruba to replace the present Inspector General of Police to give the impression that the fight against Biafrans in general and Igbo in particular were being spearheaded by the South West and the South South in collaboration with the North.
Needless to say that these plans will never work because there are more than enough men and women of good conscience in South South and South West to allow such ploy to take hold.
This divide and conquer of Biafraland effectively deployed in the past, that handed Nigeria over to core Arewa North as their estate will not be allowed to repeat itself because we are IPOB and God Almighty Creator is always on our side.
The world is put on notice that should this impending genocide commence, South East governors, Arewa Consultative Forum, Northern Elders Forum, the Presidency and entire Islamic Core North should be held responsible because IPOB is not and can never be a terrorist organisation.
We do not kill, we abhor lawlessness and till date nobody can point to a breakdown of law and order incident attributable to IPOB activities.
We are too civilised a people, from time immemorial, to want to dabble into primitive destruction of lives and properties.
That is the exclusive preserve of the Arewa North not IPOB.
All we are asking for is a referendum so that our people can decide if they want to be free in Biafra or remain as slaves in Nigeria.
Follow Us on Twitter!