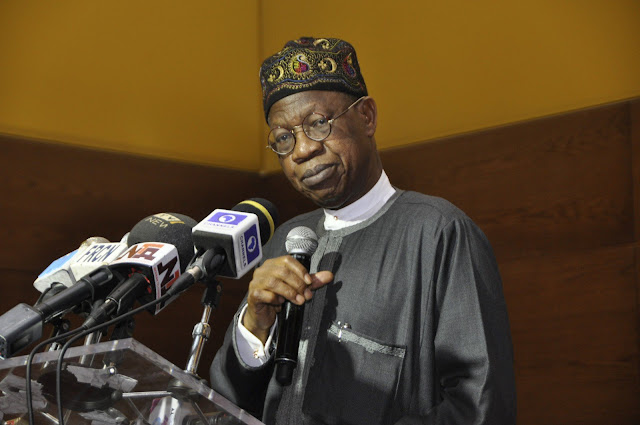 Information Minister Lai Mohammed on Wednesday said that the Indigenous People of Biafra (IPOB) group had written to western nations alleging genocide in Igbo land but that President Muhammadu Buhari had commenced the process of proscribing the group.
The minister said this while addressing the state House Press corps on the current situation in the country.
“For those who are fixated with legality, I have good news for them.
“The President has approved the process of proscribing IPOB and before he left he did approve the proscription and the procedure is on.
“And I ask, if the President had been overly concerned with the legalese where will Nigeria be today.’’
The minister noted that he had to deal with the issue of IPOB in many radio and television programmes in the past few days.
He acknowledged that it was the rights of individuals or groups to seek self-determination but the pursuit should be within the confines of the law and non-violent.
He stated that where any group crossed the line by engaging in violence it then became out of tune.
He avoided the semantics of whether the group ought to have been proscribed by the South East Governors or on the labeling of IPOB as a terrorist group by the military.
But in the other hand he noted that the group had engaged in terrorist activities.
“All I know is that IPOB has engaged in terrorist activities such as setting up prior military and para military, clashing with the national army and attempting to seize rifle from soldiers.
“It used weapons such as machetes and Molotov cocktails and mounting road blocks to extort money among others.
“The leader has openly solicited for arms,’’ he said.
Mohammed said that no national army in the world would tolerate the IPOB activities or any army that would look away when attacked by band of thugs.


The minister noted that but for the swift response of the South East governors the crisis would have turned to something else.
“For the quick action of the governors in the South East and their counterparts in the North and the traditional rulers there would have been conflagration of immense proportion.
“Permit me to especially commend the governors from the South East for making it clear to IPOB that it has no support for its violent campaign.
“By this action, the governors have cut off the oxygen that IPOB needs to survive.
“If the elected governors in the South East have banned the activities of IPOB who then is the organization fighting for,’’ he asked.
He remarked that IPOB was a political contraption against the Buhari administration and being sponsored by the coalition of the politically disgruntled and treasury looters.
The minister remarked that IPOB had decided to externalize its campaign by writing western governments and parliaments alleging genocide as well as using fake videos of killings to deceive the public.
The minister said the challenge for the country was to ensure that “we counter this narrative’’.
He noted that IPOB had opened diplomatic moves by setting up its financial headquarters in France and a radio station in London adding that government would stop the funding of the group from the diaspora.
Follow Us on Twitter!