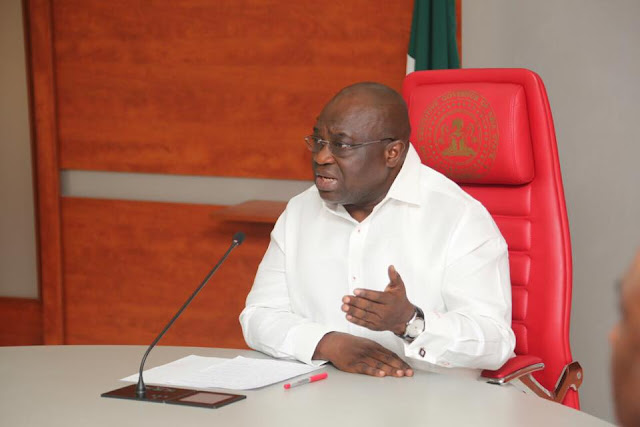 THE Governor of Abia State, Okezie Ikpeazu has lambasted the Indigenous People of Biafra (IPOB) for an alleged carrying of arms in his state.
He stated this while fielding questions in a chat with Leadership newspapers.
Reacting to a question on IPOB crisis which was attributed to leadership failure in the southeast, the governor minced no words in saying allegations are supposed to be investigated.
He said the issue raised by the agitators especially by IPOB such as marginalization, infrastructural deficiencies could be resolved by dialogue and not by carrying arms.

He said: ''Allegations are supposed to be investigated by investigative officers and I’m not trying to investigate such things, so, it is just the masses especially the press. You know, we are perception builders, we should try to say things that are good about our country, not things that are bad. I think there are enough reasons to see that under our circumstance, we may not be Eldorado yet but there are concerted efforts that attempt to make ours a better place.
''I do not see how, as an Ibo man, boxing myself into a smaller geographic entity without recourse of the most widely traveled people in Nigeria is right. There are Igbos in Sambisa, what are you expecting of them if I narrow their geography of coverage. But agitation, marginalization, infrastructural deficiencies, these are issues which are germane and they can be discussed, they can be spoken about, they can be addressed. But, I do not know how in the 21st century, carrying arms in my kitchen will grow the prosperity of my people.''
Follow Us on Twitter!