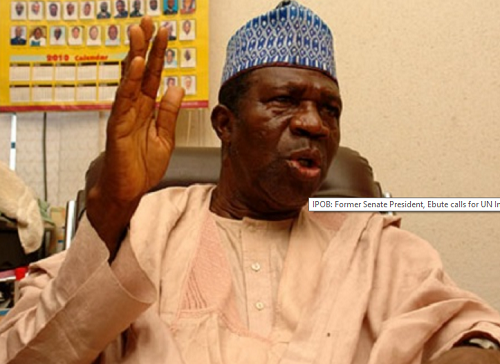 Former President of the Nigeria Senate, Ameh Ebute, has called on the United Nations, UN, to commence the process of investigating the activities of the leader of the Independent People of Biafra, lPOB’s leader, Mazi Nnamdi Kanu and members of the organization.
The ex-Senate Preaident in a letter to the UN dated September 18, 2017, said this is because IPOB  has constituted itself into a terrorist organization and has continued to act in ways that terrorises the Nigerian State with intent to plunging the West African country into war.
Senator Ebute pointed out to the world body which is currently sitting that the Nigerian Defence headquarters has  issued a proclamation which cited IPOB’s perpetration of acts like the formation of a Biafra Secret Service (BSS); advanced stages in the formation of Biafra National Guard (BNG); militants possession/use of weapons; physical confrontations and attempts to snatch military weapons from the military troops on patrol and unauthorized blockage of public access roads and extortion of money from hapless members of the general public as acts of terror.
He explained to the world body that the activities of IPOB has led to its tagging as a terrorists organization by Nigeria saying this is enough reason for the UN  to act in order to identity and do the needful.
He said, "It is therefore imperative for the UN through its organ of the United Nations Security Council (UNSC) to invoke the suitable laws to intervene in an apparently smoldering crisis in Nigeria. Permitting the progression of this crisis to the level of explosion would be devastating and definitely affect peace and security on the African continent as a whole and create humanitarian crisis of international dimension.

" The UN is implored to further initiate actions that would save Nigeria from this pending catastrophe arranged by IPOB in order to safeguard international peace and security. Our experiences indicate that some terrorists groups tormenting Nigeria today have confessed to been foreign-backed and funded. It underscores the need to give more attention to IPOB’s fierce aggression on Nigeria."
Ebute expressed concern over what he described as the exposure of traits of terrorism in IPOB which he said has been exposed  through an intensive, painstaking security investigation and analysis of the activities of Kanu and his band of followers.
He said the conclusions have been sourced and established from its relentlessly violent siege on Nigeria and promotion of hate campaigns as well as physical enforcement of compliance with illegal sit-at-home order through its militant wings.
"The Federal Government of Nigeria (FGN) under President Muhammedu Buhari has been battling the scourge of terrorism and allied insurgencies in parts of Nigeria in the last two years. But as the insecurity situation in Nigeria is gradually being normalized, the country is again woken up by sounds of unpleasant drums of war chanted by emerging terrorists sects, garbed in ethnic separatist movements which have perfected plots to unleash more heinous atrocities on Nigeria.
He said IPOB only operates in the guise of agitations for secession or actualization of a “republic of Biafra but is intent on terrorizing the Nigerian state,