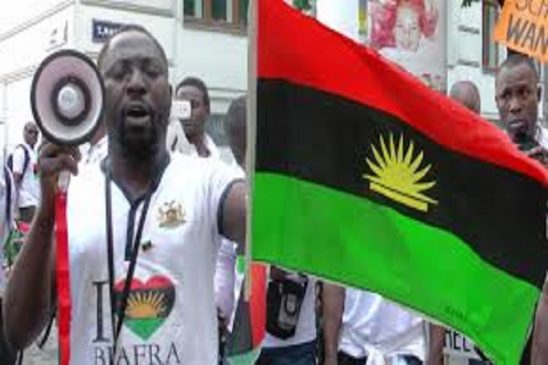 The Indigenous People of Biafra (IPOB) has denied reports that some of its members burnt a mosque in Enugu state.
The group said none of its members were involved in the setting ablaze of a mosque in Igbo Eze North local government area of Enugu state.
The IPOB in a statement signed by its media and publicity secretary Emma Powerful said the group is dissociating itself from the purported video.
Emma Powerful described as concocted, reports that, the IPOB was involved in the arson and vandalizing of places of worship in the southeast.
He said: “IPOB is not unaware of the desperation of the Nigerian army of occupation to cause mayhem and blame it on IPOB as a way of instigating counter violence against Southerners in the North.
The aim of this army of occupation led by exclusively Hausa Fulani officers is to distract our focus and firm resolve to force a peaceful referendum within the law.”

He also said that no amount of violence meted on IPOB or its members will make the group loose focus on its agitation for Biafra.
Powerful said: “Biafrans in particular and Nigerians in general should therefore blame any of such attacks on criminals gangs assembled by South East governors and Federal government sponsored gangs who are baying for blood and whose aim is to cause misunderstanding between law abiding Biafrans and other ethnic nationalities in Nigeria.”

“We wish to further state unequivocally that Muslims and other non-Biafrans living in South-East and South South have nothing to fear from IPOB, as our members are committed to a nonviolent, unarmed struggle for self determination, which is guaranteed in charters of the United Nations, international laws and other extant laws on fundamental human rights.
“IPOB does not need to remind Nigerians that it is the culture in Biafraland to protect our visitors and any of these alleged heinous acts are viewed by the great family of IPOB as abomination which our leadership and members condemn in their entirety.
“IPOB members should be vigilant and stay away from the provocative government- sponsored death squads whose main objective is to draw we Biafrans to another unplanned civil war but God forbid.
We shall overcome all our enemies and emerge triumphant in the end. Biafra or death!”
NAIJ.com earlier reported that mosques in Aba and Enugu were allegedly destroyed and burnt by suspected members of the IPOB. It was gathered that the hoodlums allegedly defecated in the property and stole various items after creating havoc in the area.
Also, the hoodlums reportedly destroyed certificates of students who worshiped at the mosques.
Article culled from Naij.com.
Follow Us on Twitter!