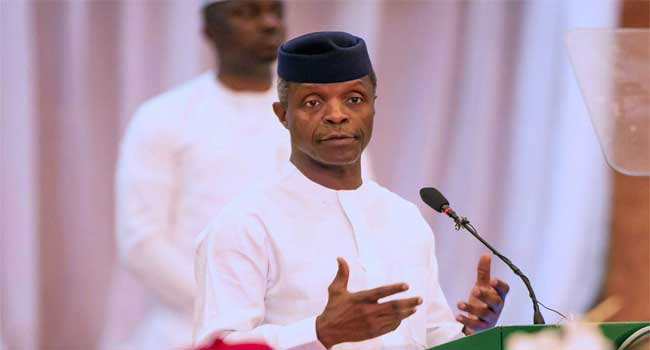 Vice President, Yemi Osinbajo, declared in Akwa Ibom, yestewrday, that despite his current position in government, he remains a pastor.
Speaking at a thanksgiving service to celebrate the 30th anniversary of the creation of  the state and  Nigeria’s 57th independence, at Uyo Township stadium, yesterday, Osinbajo, who  prayed for the government and people of Akwa Ibom, thanked the governor for his generosity and the state government for service to the women through his wife,  Martha.
“I must spend few minutes that I will speak here to speak a few words of blessing to this state because our role as ministers of God is a role that we play wherever, whether in private or public enterprise, we are still ministers of God.
“I am sure the governor recognises clearly that thanksgiving is a great spiritual work and the reward of thanksgiving are immense. That is why he has taken the trouble to put this together so that we can all thank the Almighty God.
“The word of God says in Luke chapter 17: 11; and the scripture that is there is on the 10 lepers.
“I am sure all of us know the story of the 10 lepers. After they were healed by the Lord Jesus Christ, nine did not come back; but just one came back and said thank you. Jesus said to him, ‘go, your faith has made you whole,’ in other words, he was restored.
“So, I pray for this state; I pray for you, the governor, and all of those you work with, that everything that you have lost shall be restored in the name of Jesus. Every lost opportunity and time that have been lost will be restored in the name of Jesus, and for this thanksgiving, you will be made whole in the mighty name of Jesus.”
Making reference to the theme of the celebration: Shine for thy light has come, as explained by the guest preacher, Bishop Emma Isong, the vice president urged Akwa Ibom people to rise and shine, for it is their time.
“So, I speak concerning this state, that indeed your sun shall no longer go down; your moon shall not withdraw itself. For the Lord will be your everlasting light and the days of sadness and mourning for you have ended in the mighty name of Jesus Christ.
“As you praise God, the songs of thanksgiving shall not cease from this state and from your homes in the mighty name of Jesus Christ,” the Vice president prayed.
Governor Emmanuel, who read the only Bible portion at the service taken from Isaiah 60:1, thanked Osinbajo for the love he showed the state by spending two day to partake of the celebration.

The governor requested those with bitterness in their hearts and who had done wickedly against God in the state to repent and follow the future builders in unity.
Meanwhile Akwa Ibom indigenes in Kaduna have kicked against the division of Nigeria as they joined their kinsmen back home to celebrate the state’s anniversary.
In his address on the occasion, President of Akwa Ibom State Community in Kaduna, Mr. Chris Etang, appealed to those agitating for separation to drop the fight and embrace one indivisible country.
Etang expressed happiness to the founding fathers of the state for their vision, unity and love and sacrifice that ensured the state creation.
He said as a community in Kaduna, the people have reasons to be proud and happy as beneficiaries of the struggle and sacrifice which gave them the state, three decades ago.
He urged governor Emmanuel to keep the flag of the founding fathers flying, for continuous development of the state.
The community leader thanked Kaduna State Governor, Mallam Nasir El-rufai, “for the atmosphere of peace, love and cooperation that prevails which has made our stay a home away from home, while we go about our normal day to day activities.” (THE SUN)
Follow Us on Twitter!