Home » news » Gory account! Residents of Afara-Ukwu community recount horror of how bullet flew in the air like drops of rain, corpses littered the ground in Nnamdi Kanu's domain the day army struck

Gory account! Residents of Afara-Ukwu community recount horror of how bullet flew in the air like drops of rain, corpses littered the ground in Nnamdi Kanu's domain the day army struck 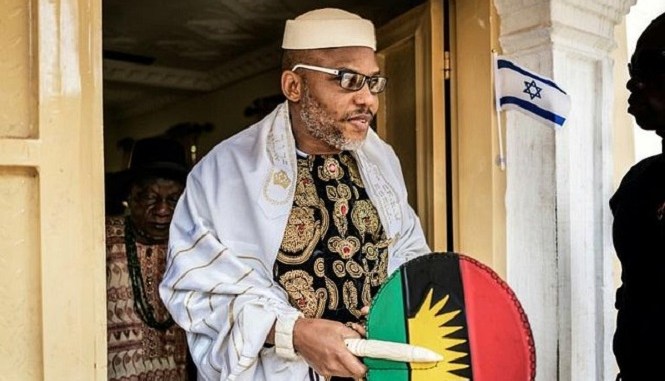 One of the upside of the operatioin, residents said, is the disappearance of hoodlums who once made life unbearable in the area, resulting in a drop in crime rates as Police Public Relations Officer, DSP Ogbonna, confirmed.
However, many houses have been riddled with bullet holes after the confrontation, especially those close to Kanu’s residence.
A motor parts dealer who identified himself as Emenike Nwadilobi said though a large number of people in the community are not in support of Kanu and IPOB’s Biafra agitation, he described the confrontation with the troops as a bloody battle.
“When I came back from the market, I saw the military everywhere with guns, armoured Personnel Carrier (APC), and there was sporadic shooting and people where running for safety. I believe this is a war and not an exercise. It is very painful because it took me over four years to erect a three bedroom flat and look at the wall of my house, destroyed by bullets, the aluminum windows in my house were also destroyed.  I hardly sleep in my house. I find somewhere else to sleep because of fear,” Nwadilobi said.
Since the clash, there has been no clear figure of casualties with claims and counter claims. The IPOB alleges that a massacre has taken place but witnesses and authorities have denied these claims. Some casualties have been recorded no doubt but there is no official figure. Even the military is claiming ignorance over this.
““Now, your question, how many people were killed? It’s a question I cannot answer because I don’t know. The point is that I knew there are issues with the social media trending. But they are all those things you cannot and you will never ascertain the death of somebody on the content of social media. It’s doubtful and even the press release they (IPOB) initiated, you saw that they were a lot of propaganda issues whenever there were military operations,” Col. Musa said.
He dismissed IPOB’s claims as attempts to discredit the military and said videos being circulated on social media about incidents that might or might not have happened during the clash will be investigated.
“We are going to investigate it. We are thoroughly scrutinizing it and if we find any soldier of the Nigerian Army taking part in it, we have to deal with the issue decisively. We have our rules of engagements guiding military operations. And any soldier who flouts the rules will face the consequence,” the colonel said.
However Onitsha-based International Society of Civil Liberties and the Rule of Law says it has identified four people killed during the clash.
Speaking to journalists in the Anambra State capital, Chairman of the group, Nze Emeka Umeagbalasi, said, “From our own report at the source, there was a midnight raid in Aba and a lot of people were killed by soldiers on Operation Python Dance II. A lot of people ran away and slept in the bush and a lot were injured. It is a fact, not fiction. From investigation, we have four of the names of those killed. They have recovered bullets used and abandoned during the raid. So, if the military tells you it did not invade, it is false.”
While the rhetorics go on, traders in Aba,  the commercial nerve centre of Abia State are counting their losses.

Mrs Nkiruka Akomas, who sells perishable items such as vegetables, recalls that on the Saturday that preceded the crises in the state, she went to the market where she bought okra, fresh tomatoes and pepper in large quantities to make supplies to her customers. But sadly, after the clashes the next day, the Abia State Governor Okezie Ikpeazu imposed a curfew, thereby making it extremely difficult for her to sell her goods. She said she had lost both her perishable goods and her capital as a result.
Mr Kufre Okon,  a tailor, who specializes in sowing clothes either for traditional marriage or white wedding ceremonies, narrated how the crisis and the subsequent curfew made him unable  to meet up with deadline for customers to pick up their clothes and some customers whose clothes were ready had a hard time collecting their clothes. “The crisis caused me to lose a lot of money,” Okon said.
Softening the blows
In an attempt to bring a humane face to “Operation Python Dance II”, the military is offering free medical outreach to people in the South-East and would be engaged in repairs of roads, schools and other infrastructures across the region.
“The Chief of Army Staff has therefore directed that a contingent of durable mechanism be imbued in the overall planning and execution of the exercise to achieve a hitch-free yuletide for the entire region,” Col. Musa said.
He said the medical outreach is aimed at gaining the support and understanding of the locals on what the exercise is all about.
“This will further cement the existing mutually cordial relationship between the Nigerian Army and the civil populace particularly in the areas of our operations,” Musa said.
The medical outreach programme has just been concluded in Ebonyi State while Enugu State will be the next area to benefit.
Python Dance in Owerri, capital of Imo State has had it share of stern-faced soldiers as part of the operation in the South-East.
Our correspondent was informed that the presence of armed soldiers has caused fear and anxiety among some residents, particularly on the Okigwe Road Junction Owerri axis where soldiers are stationed.
A resident, Mr Lawrence Nwachukwu who spoke to our correspondent on the phone said, “I heard the soldiers have come into Owerri. But that doesn’t mean that they are harassing everybody they see. No. They are only after troublemakers and those who are holding or wearing the IPOB/Biafra insignia since the group has been proscribed. When you have such items and you walk towards the location of soldiers, it means you are looking for trouble because you may not know the kind of order their commander gave them.”
Another resident of Owerri, Duru Chidozie said that the presence of soldiers in the capital has caused a change in the city.
“All the insignia of IPOB are nowhere to be found on the streets and roads of Owerri. The soldiers were stationed in some strategic locations such as Owerri-Port-Harcourt Road, Owerri-Aba Road. The soldiers are also at the Owerri-Okigwe Junction as well as inside the metropolis. But the aggressive soldiers are gone. That’s the situation here in Owerri,” he said.
(Post syndicated from Daily Trust)
Follow Us on Twitter!