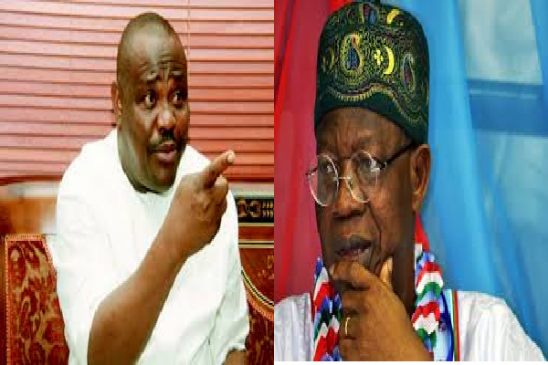 Rivers State Governor, Nyesom Wike has appealed to well-meaning Nigerians to call on the Minister of Information, Lai Mohammed to stop stirring up embers of disharmony and divisions in the Peoples Democratic Party, PDP.
The governor has cautioned Lai Mohammed to desists from making “irresponsible utterances and wild allegations against members of opposition political parties.”
Nyesom Wike has said Nigeria is in severe crisis while everyone is living in pretence.
Wike said the country was in crisis because of poor governance, nepotism, marginalization and state-sponsored repression which had continued to jeopardize national unity and cohesion.
The Governor said this while declaring open the All Nigeria Editors’ Conference holding in Port Harcourt.

The governor noted that the clamour for political restructuring, fiscal federalism, State police and guarantee for free and fair elections had never been so determined across the country.
He said the calls will never go away, pointing out that it was becoming clearer by the day that to ignore it was pretentiously dangerous to the unity and peaceful co-existence of this country.
According to him, “We are only pretending, we think that all is well with our country.
“The country is in crisis as poor governance, nepotism, marginalization and state-sponsored repression continue to do violence to nation unity and cohesion.
“At times like this, the country needs forthright leadership and consensus building to steer the ship of state from the wrong direction it is headed to safer grounds.
“Nigerians of goodwill must therefore call the Minister of Information to stop stoking the ambers of disharmony and divisions in the polity with his irresponsible utterances and wild allegations against members of opposition political parties.

“For some of us therefore, there is nothing nobler than being counted on this path and as long as God gives us breathe we shall remain in the trenches fighting for our democratic rights and freedoms until victory is ultimately achieved.
“But, we also believe that this is a fight that should and must be led by the media for full effect and agenda setting. This calls for greater vigilance and courage in giving effective voice to the contending issues and taking personal responsibility for factuality. Itcan’t be otherwise. ‎
“Therefore, when a supposed opposition goes beyond the bonds of decency in conjuring lies to rubbish and undermine every effortof ours to serve and advance the progress of the State, then the media owes society the duty to investigate and expose their mischievous intentions with the facts at their disposal.
“At any rate, those who live in glass houses, they say, should avoid throwing stones,” he said.