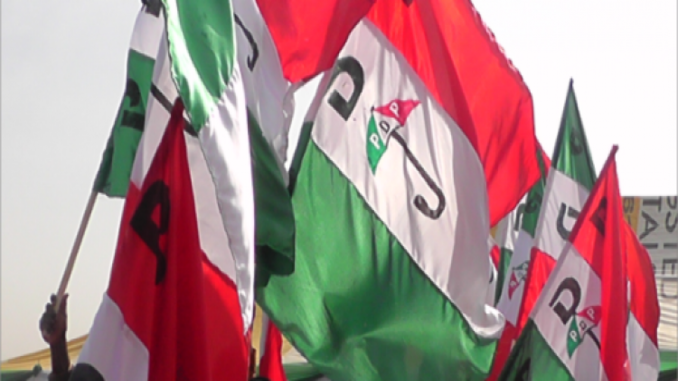 An amalgamation of civil society and socio-political groups in Nsukka local Government Area of Enugu State, under the aegis of Nsukka Democratic Movement (NDM), has in a statement sent to US, rejected the candidature of Mr. Patrick Omeje as the Peoples Democratic Party (PDP) chairmanship flag bearer, urging the party to replace him with immediate effect or lose the election.
The coalition, comprising Independent Nsukka Solidary Agenda Worldwide, United Nsukka Indigenes for Good Governance, Nsukka Arise for Change, Nsukka Youths Empowerment Initiative, Greater Nsukka Congress, Alliance for Democratic Governance, among others, insisted that if the PDP candidate was not replaced, they would mobilize opposition against the party in the council come November 4, 2017.
The NDM in that statement signed by its Coordinator, Comrade James Ezema and its Secretary, Dr. Joseph Idoko made available to US, accused the candidate of intimidating and harassing Nsukka indigenes with siren even before the election, saying “if he can intimidate people with conveys and siren when election has not taken place, we are not safe if he wins the election”.
The groups maintained that “Beyond doubts about his competence and academic qualification, which is currently under investigation by our coalition, he has so far shown that he lacks qualities of a good leader. Worst of all, he seems not to be disposed to learning.

“We see the emergence Mr. Patrick Omeje as a fulfilment of a policy of marginalisation of Nsukka by political godfathers in the Enugu state.
“We advise Governor Ifeanyi Ugwuanyi to carry out a secret popularity and acceptance test of the PDP candidate in Nsukka as a whole to understand the danger in retaining him as a candidate for the election.
“We will resist, through every democratic means, the replay of the tenure of Prof. Mrs Rose Onah, which was characterised by underperformance in the council if the PDP insists on foisting an incompetent and irresponsible leadership on the people of Nsukka at this time.
“We learnt that the party ensured that only the candidate purchased form for the primary that produced him by those who want to rubbish the good works of the incumbent state government.
“The people’s Governor, Hon. Ifeanyi Ugwuanyi, has recorded giant strides, which we cannot fold our hands while a man who, obviously, would erode all his legacies emerges as chairman and take us back to the dark days of non-performance in the council.
“We call on opposition forces in Nsukka to produce a credible candidate for our endorsement and mobilisation of support ahead of the November 2017 local government election to defeat the ruling party in event that the PDP upholds the process that produced Mr. Omeje as its flag bearer”, the coalition vowed.
Follow Us on Twitter!