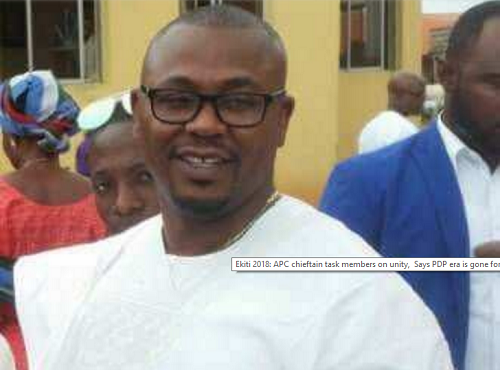 A stalwart of the ruling All Progressives Congress in Ekiti State, APC and the founder of PAT Royal foundation, Prince Tayo Adebiyi has charged members of All Progressive Congress in Ekiti to come together and form a common front against the incumbent governor and his party PDP in the state.
He stated this when addressing the press today at the state capita Ado Ekiti. He, however, challenged all stakeholders within the party to see themselves as one family with a common goal, objectives and focus. Prince Tayo maintained that the common enemy of APC is Fayose, PDP and not the same party members, he charges party members to shelves all forms of internal wrangling, hates campaign and blackmailing.

Speaking further, Prince Tayo maintains that the primaries election will only produce one candidate out of the many the party is presently parading, he stated that having many aspirants on the ballot of the party primaries election is a good omen for the party and sign that All progressive party is the toast of Ekiti people.
Tayo, however, beckon on party members to jealously guide the apparent opportunity to win the forthcoming gubernatorial election by a wide margin, we shouldn't allow unnecessary internal beefing jeopardise and make our work difficult during the gubernatorial election In June next year.
He, however, praised the effort of party leadership at ensuring peaceful coexistence among party members.