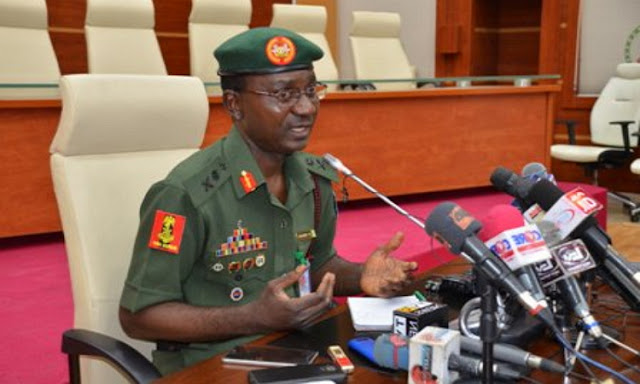 The Defence Headquarters (DHQ) said the various military operations going on across the country to deal with the various security challenges would be sustained.
Defence Spokesman, Maj.-Gen. John Enenche, stated this at a news conference in Abuja on Friday.
Enenche also said that the exercises were being carried out by the armed forces not only to tackle the challenges but to train personnel, adding that they were being done in line with best international practices.
He declared the unalloyed loyalty of the military to the Commander-In-Chief of the Armed Forces and the Constitution of the Federal Republic of Nigeria.
Responding to questions, Enenche urged the citizens not to be alarmed in the face of the presence of the military in almost all parts of the country.
He explained that they were assisting civil authorities to tackle emerging security threats.

The defence spokesman noted that the emerging threats were not unexpected as the nation passes through various stages of development.
According to him, some of the advanced countries have also passed these stages where their armed forces are called in to assist civil authorities to tackle security challenges.
On the whereabouts of Nnamdi Kanu, the leader of the proscribed Indigenous People of Biafra, IPOB, Enenche maintained he was not in custody of the military as being insinuated in some quarters.
On the quit notice issued to the Igbo by Arewa youths to leave the Northern part of the country on or before October 1, he said that the issue had been addressed by the political leadership.
He, however, said that measures had been put in place to address any eventuality and assured the citizens that they were safe to live wherever they chose in the country to carry out their legitimate businesses. (NAN)
Follow Us on Twitter!